In our previous post on the 4th-round women’s Wimbledon upsets, we mentioned that as of June 27, Victoria Azarenka seemed to be undervalued at a leading sportsbook. That’s a bit of a simplification. What we really believe is that there seems to be something funny going on with the women’s Wimbledon futures at, which makes the odds for Azarenka, Kvitova, and Paszek illogical when viewed in context of each other.

My guess is that it’s a result of there simply not being a very big market for “Player X to make the Final” at this point in the tourney, so the market isn’t liquid enough to be fully efficient. At any rate, here’s the situation.

For each of the quarterfinalists, I used the markets at leading sportsbooks to come up with a player’s chance of winning in each round, provided she makes it that far. For example, the odds of Sharapova winning in the semis, provided she makes it that far are: [her odds to make the final, adjusted for juice]/[her odds to make the semis, adjusted for juice].

This results in the following chart, which shows each player’s odds as they advance. I highlighted Victoria Azarenka and her opponent, Paszek,  as that’s where it looks like something funny is going on. 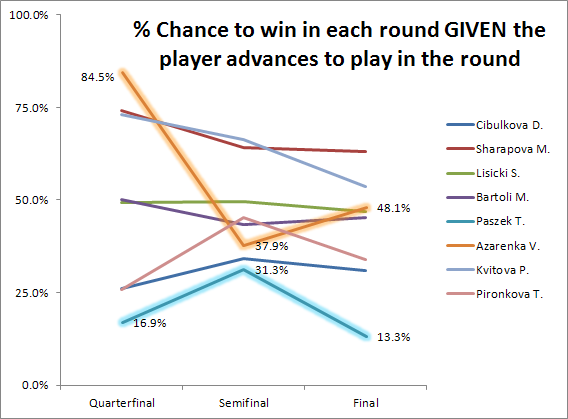 Notice that Azarenka is the biggest favorite in the quarters. And again in the Finals, she is projected to do well, while Paszek is the worst of the bunch. This should imply that Azarenka is much better than Paszek, and so her implied semifinal odds should be higher. Yet, in the semifinals, she and Paszek have very similar chances to win.

Austin pointed out that Azarenka’s most likely semifinal opponent is Kvitova, who beat her in 2 sets in the Final of a tournament just last month, and is seen as a rising star in women’s tennis. I’m wondering if that recent match could be skewing some opinions.

Whatever the reason, the odds seem illogical, and we see two main possibilities for why the internal inconsistency exists:

1. Azarenka’s odds to advance to the final (and possibly to win Wimbledon) are undervalued, while Paszek’s and Kvitova’s are overvalued.

Not only is the first option the simpler explanation, it also agrees with what our Wimbledon women’s rankings tell us: that Azarenka is the best player remaining in the field.

What a difference a day makes. The analysis explained above used odds that were current as of a few hours before the start of the women’s quarterfinals. Since then, Azarenka’s odds to reach the final have gotten a lot shorter, while her odds to win Wimbledon have remained steady.

Such a shift certainly changes her implied odds in the chart above, and the ironic result is that we now believe that Azarenka’s  Vegas-implied odds to reach the final game may now actually be overvalued, and no longer undervalued.

Maybe this was just a random blip, but for whatever reason, it looks like there was a short window of time for a sharp bettor to jump on a market inefficiency before the market corrected itself.

Wimbledon Upsets: With Serena Williams, Venus Williams, and Wozniacki Out, Who's In The Driver's Seat?