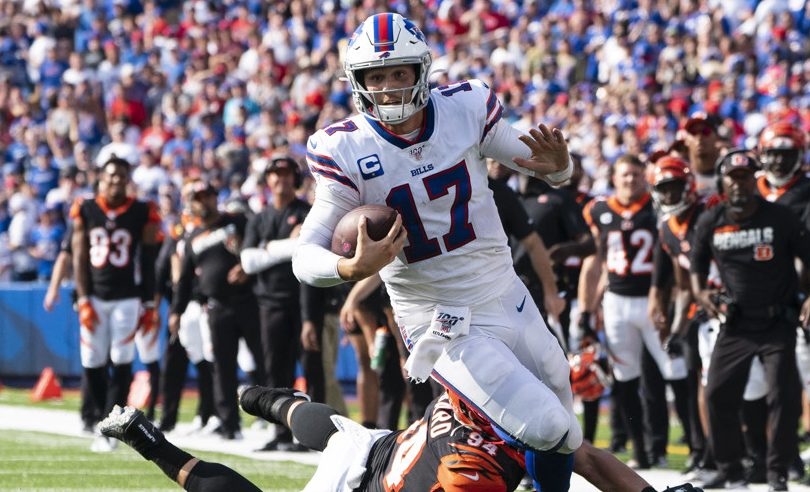 In this post, we’ll analyze the five most popular survivor pool picks of Week 7 2019, using the “Holy Trinity” of pick data we introduced in our first survivor post of the season: win odds, pick popularity, and future value.

This is an early assessment of the Week 7 survivor outlook. If numbers have changed significantly by Friday, we may update it later in the week.

Week 6 featured two large favorites that won (New England and Baltimore) and then a host of other upsets that eliminated other choices. Dallas losing to the Jets eliminated 14% of survivor entries, the Chiefs and Chargers both losing took out another 4% each, while the Rams and Falcons also had some support. Put it altogether, and 26% of the public was eliminated last week.

When you add in the 74% public survival rate in Week 6 to our recommended picks surviving at an 89% rate to our previous survival advantage, cumulatively the public has survived through to Week 7 at 19% overall, while our recommended entries have survived 31% of the time through six weeks.

Week 7 NFL Survivor Pick Analysis: Buffalo is the Popular Choice, Should You Follow?

Miami is back as a very large underdog, after being on a bye and then playing Washington at home. That means that their opponent, Buffalo, is an extremely popular choice, and deciding if you want to use them is a big factor in survivor. With that context, let’s analyze the five most popular survivor picks for 2019 Week 7.

Buffalo is the safest pick on the board in Week 7. That, combined with the fact that up until now the Bills have not been a popular choice in survivor, means that they have very high popularity this week. In fact, about two-thirds of all entries are picking Buffalo so far.

Does that mean they are a bad choice? Not necessarily. The high win odds still make them a reasonable option. But one thing you have to consider is that they do have pretty good future value, and look like a safe option again in Weeks 9 and 11. We separately wrote about how Miami is impacting survivor pools, and looked at some of the strategy options you can consider to go against the “pick the team playing Miami” crowd, including for this week.

If you do trade off some safety this week for future value, Buffalo plays Washington at home and Miami again within the next four weeks, and will be far less popular because most entries will have already used them by then.

Like Buffalo, San Francisco has been little used up until now, but that is about to change as the 49ers look like one of the best teams in the NFC going forward. They are in the tier right behind Buffalo when it comes to safety this week, as they do have to play on the road at Washington.

The 49ers are coming in as a moderately popular choice, which does impact some of their value this week, though they are still a reasonable option. Like Buffalo, the factor you need to weigh is how you want to approach the next few weeks, as they are also one of the safest options in both Weeks 9 and 11, when they play Arizona twice in the span of three weeks.

If you want to avoid Buffalo, though, they are safer than the next tier of options, because other than New England (who most entries have used), no other team this week is favored by at least six points currently.

The Green Bay line has already dropped by a point in early movement, after opening at 6.5. The Packers survived on Monday night with a late field goal, overcoming plenty of miscues and injuries to the receiver group. The injuries, though, mean that this game is a little riskier than it appeared a few weeks ago.

The Packers are not as safe as the top two most popular entries, but the large dropoff in popularity does make up some of that value. Green Bay also doesn’t have the same future value as Buffalo and San Francisco. The next time we project the Packers to be one of the top three safest choices by win odds is in Week 14 when they host Washington.

New England is being used by only 2% of the public because most of the public has already used them to get through the first six weeks. If you still have them, they are an attractive option this week as a high win odds team with a similar safety profile to San Francisco, but coming in at one-tenth the pick rate.

As you can see with the popularity figures, almost all of the public (88%) are taking either Buffalo or San Francisco this week. Kansas City makes the list here, but at only 2% popularity. The Chiefs have lost two in a row, are having major defensive issues, and now travel to Denver for a quick turnaround on Thursday night.

They still have good future value in Weeks 13 and 15 (and the offensive line may be healthier by then). There are at least three other options who have similar or better win odds this week, and less future value, if you want to avoid the other popular choices. Our recommendations have largely avoided the Chiefs in recent weeks, and the current win odds make it likely they will do so again.

Get Our Customized NFL Survivor Pick Advice For Week 7

The teams mentioned in this post are the most popular picks this week, but that doesn’t mean one of them is the best pick for you. In fact, there are a few other Week 7 choices that look attractive depending on your pools’ tiebreaker rules, size, and who else you have already used after the first five weeks. But it takes a lot of data and math to figure out which pick (or combination of picks, if you’re playing multiple entries) gives the biggest boost to your expected survivor pool winnings.

Enjoy NFL Week 7, and if you’re in an NFL pool or planning on betting some of the Week 7 games, please check out our NFL Survivor Picks, Football Pick’em Picks, and NFL Betting Picks.