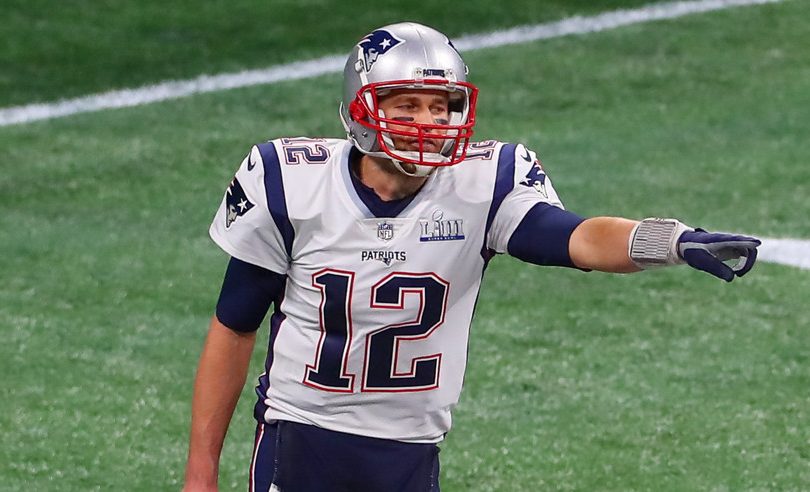 Tom Brady would like to point out the Patriots have lots of future value, especially in January (Photo by Rich Graessle/Icon Sportswire)

Last week provided quite a few nervous moments for survivor pool players picking the biggest favorites like Philadelphia and Seattle. But somehow, some way, roughly 90% of survivor entries nationwide ended up making it through the week.

For 2019 Week 2, we’re back to analyze the five most popular survivor and knockout pool picks of the week using the “Holy Trinity” of pick data we introduced in our survivor post for Week 1 2019: win odds, pick popularity, and future value.

That deeper level of analysis is big reason why our subscribers reported nearly $1.5 million in survivor pool winnings over the past two seasons.

(Note that this is an early read on Week 2 survivor picks, and data may change over the course of the week. Check back later in the week and we may have some updates.)

Your survivor pick in Week 2 comes down to a pretty clear decision: Patriots, Ravens, or some other team.

After impressive victories last week, both New England and Baltimore are double-digit favorites against weak teams in Week 2. As an 18.5-point favorite at post time, New England in particular offers a level of safety rarely seen in the NFL — especially for a road team.

However, those with good survivor memory will surely recall the fate of a team favored by almost as much in Week 3 of last season: the Minnesota Vikings, whose upset loss to Buffalo knocked out nearly 60% of still-alive entries in survivor pools.

Does that mean you should avoid New England? Let’s break down the pros and cons of the most popular Week 2 survivor pick options.

[Editor’s Update: the same five teams that were the most popular on Tuesday are still the most popular choices, but the relative pick percentages have changed slightly. These numbers were updated on Friday to reflect changes in pick popularity and point spread.]

Survival Pool Pick Popularity: 28% [note: this has gone down from 32% since Tuesday]

New England is a massive favorite this week against Miami. The argument for using the Patriots this week is that you are almost certain to advance, and that’s not a phrase we throw around lightly. Our models have New England’s win odds at 91%; the betting markets are slightly more optimistic at 92%.

One argument against using New England this week is that the Patriots have tremendous future value. New England is currently one of the top three teams in projected win odds in 9 of 15 future weeks, and the projected most likely winner in three future weeks. If you can get through Week 2 without using New England, you will have those lethal bullets still in your survivor clip.

In fact, New England and Baltimore are currently projected as the two most likely winners in Week 6 as well, when the Patriots host the Giants and the Ravens are home against the Bengals.

New England’s pick popularity, while the highest at 28%, isn’t actually that high for a team favored by as much as they are. Going back to 2010, according to historical data from SurvivorGrid.com, the 20 biggest favorites (by win odds) during the first four weeks of a season averaged 39% pick popularity. And New England is tied for the second-highest win odds during that first-four-week time period.

(As mentioned above, in comparison, Minnesota’s pick popularity in Week 3 last year was closer to 60%, and the Vikings had a lower chance to win than the Patriots do this week.)

So the primary concern with the Patriots is burning future value, plus the fact that there is another very likely winner on the Week 2 slate in Baltimore. That dynamic means that compared to the next-safest option this week, the relative safety of New England isn’t as big as it would have been if this game was in most other weeks.

Baltimore’s win odds are lower than New England’s, but are still around 85%, which is significantly higher than most survivor picks you need to make. Like New England, the Ravens’ pick popularity is also high, but not prohibitively so, as they are effectively splitting the vote with New England.

The Ravens were impressive in Week 1, but you always need to be careful about judging on a sample size of one game, especially if Miami turns out to be an even worse team than expected this year. As of now, our numbers show Baltimore with less future value than New England, especially since after Week 2, the Ravens will already be past two of their highest win odds games of the season.

Choosing the Ravens, then, comes down to settling for a slightly less popular entry (good), with less future value (good), in exchange for a bit more risk of elimination compared to the Patriots (bad).

Survival Pool Pick Popularity: 16% [note: up from 13% earlier in the week]

Houston shot up to third in pick popularity in the early going as the top alternative candidate to the Patriots or Ravens. As we discussed in our NFL Week 2 preview post, this line appears to reflect a shift of several points compared to what it likely would have been if Jaguars QB Nick Foles had not gotten injured. If rookie Gardner Minshew wasn’t starting, Houston likely would not have made this list of most popular Week 2 survivor picks.

Picking a team like Houston — or really any team besides New England or Baltimore — demands an awareness of the risk context of Week 2. In many other weeks, a team like the Texans would be in the top tier of safest plays. In Week 2, though, the Texans are a much bigger risk compared to one of the largest mismatches in recent NFL history.

It’s worth mentioning that Houston’s future value is fairly low for a team seen as a playoff contender, and this game projects as their best shot to win for the rest of the season, along with Week 8 when the Texans host Oakland.

That’s a relative plus, but when the majority of your pool will have an 85% chance or better to survive this week, and when it will take not one but two gigantic upsets to knock them all out if you fade the crowd, it may not be the best week for riskier contrarian gambles.

Carolina is a somewhat more risky, slightly less popular version of Houston this week. So just as the Ravens and Patriots may be splitting the survivor entries of players who are willing to burn a great team in Week 2, the Panthers and Texans appear to be splitting the vote for players zig-zagging the other way.

Carolina also has very low future value, and if you don’t use them in Week 2, you may not need to use them at all this year, depending on how long your survivor pool is expected to last.  At the very least, you may have plenty of other options that don’t make Carolina a clear pick in any future week.

[Friday Update: as noted, Carolina was a riskier version of the Texans’ pick, and that risk was realized when they struggled the red zone and lost on Thursday night, becoming the first team with greater than 10% pick popularity to fall this season.]

The Chiefs are the fifth most popular survivor choice of Week 2, registering well below the pick popularity (4%) of the Panthers and Texans.

Kansas City is similarly safe as Houston and Carolina, with a lower pick popularity to boot, which is good. However, the Chiefs have far more future value than either of those two teams. The Chiefs, in fact, have the second-highest future value of any team, behind only New England.

If you are in a pool that projects to go deeper into the season (again, read our post on how long survivor pools should be expected to last), the Chiefs are a highly valuable asset you’d ideally want to keep in your future survivor toolbox.

Add in that Kansas City is more likely to have WR and return specialist Tyreek Hill back with the offense later in the year, and the Chiefs appear to primarily be a potential contrarian Week 2 consideration in smaller pools you would not expect to run into the last five weeks of the season. With a roughly 15% higher elimination risk than the Patriots, though, that’s no small gamble.

Get Our NFL Survivor Pick Recommendation For Week 2

The teams mentioned in this post are the most popular picks this week, but that doesn’t mean one of them is the best pick for you. Every possible survivor pick has an expected value and future value associated with it, and those values vary based on the characteristics of your pool.

As a result, it takes a lot of data and math to figure out which pick (or combination of picks, if you’re playing multiple entries) gives the biggest boost to your expected survivor pool winnings.

Enjoy NFL Week 2, and if you’re in an NFL pool or planning on betting some of the Week 2 games, please check out our NFL Survivor Picks, Football Pick’em Picks, and NFL Betting Picks.