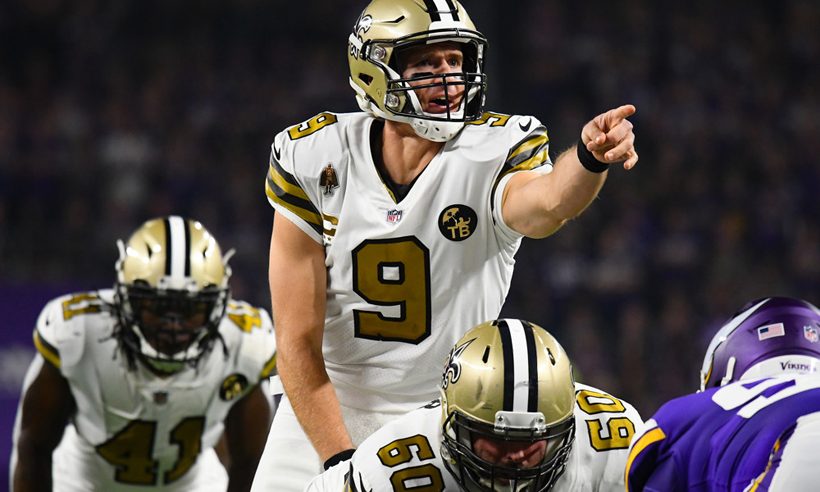 A short note to begin: Now that we’re entering the home stretch of the 2019 season, the full text of our weekly NFL survivor pick article will be available to TeamRankings premium subscribers only. (If you’re already a premium subscriber, just make sure you’re logged in, and you’ll see the full article.)

For those interested in subscribing, we just rolled out a new weekly subscription option, plus we’re offering a special discount on our rest-of-season survivor package, which includes our customized weekly picks for your pools.

In this post, we’ll analyze the five most popular survivor pool picks of Week 10 2019, using the “Holy Trinity” of pick data we introduced in our first survivor post of the season: win odds, pick popularity, and future value.

This is an early assessment of the Week 10 survivor outlook. If numbers have changed significantly by Friday, we may update it later in the week.

The three most popular choices from Week 9 survived, though it was dicey. San Francisco got a closer game from Arizona than expected, winning by 3 points. Seattle went to overtime at home against Tampa Bay, and won the toss and drove for a winning score. Green Bay and the New York Jets, the next most popular entries, were not as fortunate. With their losses, plus some other smaller ones, the public survived at an estimated 86% rate for the week.

Overall, the public has survived at approximately a 16% rate to Week 10, and our recommendations at a 17% rate. Our subscribers also have a higher percentage of 49ers, Vikings, Bills, and Chiefs still available for future use compared to the public, which could be important in coming weeks.

This week features two teams being selected by around 40% of the remaining public entries so far. They each look like the safest choices this week, but should you stay with one of them, or take a little more risk and fade both and play for the big upset? Those are the choices that face survivor players this week.

Drew Brees is back, the Saints have an attractive matchup against rival Atlanta, who are 1-7 and 30th in points allowed per game, and have a league-low 7 sacks on defense. New Orleans has also been little used in survivor until now. In fact, their highest popularity figure until this week was 5% of the public entries taking them in Week 8. That means most entries have them available, and a large percentage are using them as the highest win odds team of the week. Our models put them at 83% win odds.

That high popularity figure takes away some of their value, in a week with two other options with greater than 80% implied win odds based on the betting market money lines.

This does look like the best option to use New Orleans based on projected win odds, and the only one where we currently project them as a top three option. They do, though, have three other weeks where we project their win odds at 70% or better, and could be a good future lower popularity play.

The Colts have not been a popular choice until now in survivor, and likely will not be again for the rest of the year. So if you want to use them, this is the spot to do it. The win odds are currently at 81% from the betting markets, and our odds are a little lower at 78%. Jacoby Brissett’s status is still uncertain, and that could be holding down some of their value and is something to monitor. Veteran quarterback Brian Hoyer would get the start if Brissett cannot start.

But regardless, they are one of the safest choices this week. As with the Saints, their value is somewhat held down this week because the popularity figure is pushing 40%.

Unlike the two most popular options, the Baltimore Ravens have already been a very popular survivor choice in multiple weeks. That’s why their pick popularity is down at 6%, a small fraction of both the Saints and Colts, despite having similar win odds playing against winless Cincinnati on the road.

That means they look like the best value of the most popular options, but there is also a high likelihood that they are not available to choose.

Baltimore also has the best future value of any of the most popular choices this week, and in particular, look like an attractive choice in Week 15 when they host the New York Jets.

[This section has been updated on Wednesday at 5 pm]

The game was off the board on Tuesday, while we awaited official news on Patrick Mahomes’ status. On Wednesday, the line opened at Chiefs by 4 and quickly moved up to 5.5 points. That line seems to reflect a belief that he is likely to play, as our full season predictive ratings would have the Chiefs at 6.1 points better than Tennessee on a neutral field, and this game is in Tennessee.

The Chiefs have pretty good future value, and if you have not burned them yet, they look like a safer option in both Week 13 (vs. Oakland) and Week 15 (vs. Denver), at which point it is expected that Patrick Mahomes will certainly have fully healed.

They are in the same safety profile range as several other options this week, in the tier behind the Colts, Saints, and Ravens. Our models give them a 69% chance of victory, which is a drop-off in safety which is offset by the much lower pick popularity (see Green Bay discussion below).

Given the volatility in the early point spread and the remaining uncertainty around Mahomes’ status, it’s best to keep an eye on this situation throughout the week.

Green Bay sneaks into the bottom of this list at 2% popularity, with over 90% of the public going with the top three choices. They are a tier below the top choices in terms of safety, and our models give them a 69% chance of victory against Carolina.

That heightened risk is countered by the lower popularity and the payoff potential for an upset for one of the top two choices. While either the Saints or Colts individually losing is not likely, that means there is roughly a one-in-three chance that at least one of them does, and that would wipe out at least 40% of remaining entries.

If you do not use Green Bay in this spot, they are an attractive option in Week 14 when they host Washington.

We also went into a lot more detail on why we might be recommending that you play on teams like Kansas City and Green Bay (and others, like San Francisco and Tampa Bay), and avoiding the Colts and Saints this week in our survivor product note updates. So if you want a more in-depth game theory breakdown, read here.

As a subscriber, you have access to the customized survivor picks for your specific pools. Remember that the information here is written earlier in the week, is a more general summary of the week that may not be applicable to your pool rules, and some information could be outdated by Sunday. Pick popularity can change over the course of a week, and injury news and line movements can alter which picks are the best for your pool. So don’t forget to visit our NFL Survivor Picks before your deadline to submit picks, and also visit the Football Pick’em Picks and NFL Betting Picks.