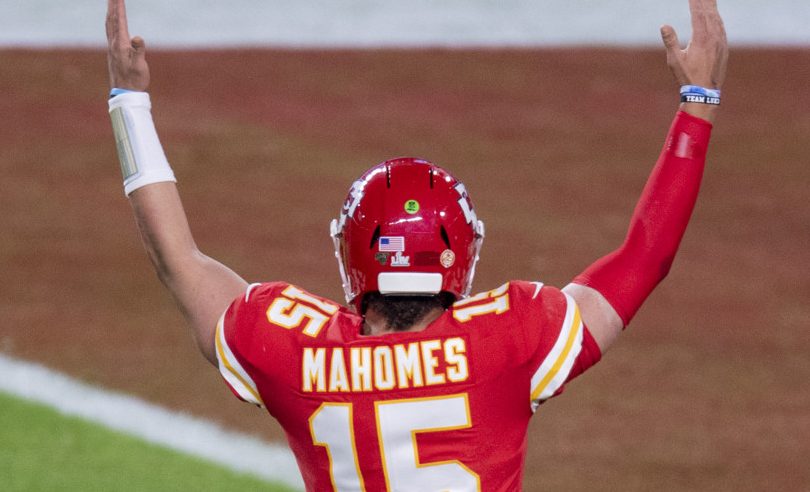 In this post, we analyze the betting market for Super Bowl MVP by exploring historical data and matchup factors and relating them to this year’s MVP candidates from Tampa Bay and Kansas City.

Ultimately, we’re looking to identify situations or angles that indicate positive expectation Super Bowl MVP bets that can be made at currently available lines offered by one or more major US sportsbook.

Every Chiefs and Bucs player besides QBs Patrick Mahomes and Tom Brady will be a longshot bet to win Super Bowl MVP this year. However, betting on a long shot, or even on a “portfolio” of several different long shots, can still offer solid value if you’re comfortable with the risk.

Conversely, even though Mahomes and Brady are the two most likely players to win Super Bowl MVP this year, that doesn’t necessarily make them smart bets. You need to dig into the numbers to try to evaluate the risk vs. reward of betting on each of them.

Finally, many different sportsbooks offer odds on specific players to be named MVP of Super Bowl LV, and in some cases, these odds can vary significantly from sportsbook to sportsbook. So it pays to shop around. This post will give some specific examples to illustrate what we mean.

First, let’s take a look at some of the common characteristics of past Super Bowl MVP winners.

Almost every Super Bowl MVP has played for the winning team. The last — and only — Super Bowl MVP to come from a team that lost the game was Chuck Howley, linebacker for Dallas, way back in Super Bowl V (that’s 50 Super Bowls ago, for those of you rusty on your Roman numerals).

Given that it’s been 50 years since a MVP came from the losing team, you almost certainly have to select a player on the winning team to cash a Super Bowl MVP bet.

The MVP Award has also been dominated by winning quarterbacks.

The chart below shows that quarterbacks have always been the most likely position to win the MVP Award, but that trend has only gotten stronger in recent years as passing numbers and scoring have increased.

While 7 running backs have won a Super Bowl MVP Award, it last happened 23 years ago, when Terrell Davis won it while rushing for 157 yards and 3 touchdowns. (His team’s QB, John Elway, had only 127 passing yards and no touchdowns in that game.)

The running back position has become de-valued in recent years and it would likely take an exceptional performance to break this streak, especially given that both the Chiefs and Bucs are led by top-tier quarterbacks.

Super Bowl MVPs by Position, based on the Over/Under

Here’s a look at what position won the MVP Award, grouped by the over/under line, which is the expected number of points scored in the game according to the betting market. (All games included except Super Bowl I; older data is from Pro Football Reference.)

There is a correlation here between the expected total points to be scored in the Super Bowl, and how frequently a quarterback is selected as MVP.

Only two non-quarterbacks have won the MVP Award when the Over/Under entering the game was 52.0 or higher:

Given the historical context above, let’s take a look at the Super Bowl MVP Odds for this year.

As mentioned in the introduction to this post, the two quarterbacks are the favorites, with Patrick Mahomes (last year’s winner) leading the way.

As of Tuesday January 26, here are the five lowest payout odds to win Super Bowl MVP; in other words, betting on these players will return you the least amount of money, compared to other players. (We list a range of odds that were available across multiple US sportsbooks on 1/26.)

And here is a chart showing even more players, with the odds (as of Tuesday afternoon, January 26th) from four different US sportsbooks: DraftKings, FanDuel, BetMGM, and PointsBet.

In addition, most of the books offer bets where you can just try to pick the position of the MVP winner, or whether it will be a QB or non-QB.

You can check out each of the above Sportsbooks at the following links:

The Best Value Appears To Be On Quarterbacks

It may be boring to say, but based on historical trends, it appears that the early value in the Super Bowl MVP betting market is most likely on the favored quarterbacks. We noted in the Historical Analysis section above that the rate at which quarterbacks win MVP is correlated with the Over/Under for the game (and by extension, the perceived quality of the offenses coming in).

In other words, it took some serious outliers for a QB not to win MVP in Super Bowls that were expected to be high scoring.

Nothing is certain and unexpected developments like injuries can always wreak havoc on the best logic. But in a game between two historically great QB’s like Patrick Mahomes and Tom Brady, it’s difficult to construct a narrative where the winning team ends up getting a mediocre or worse performance from its QB.

Let’s take a look at what the implied odds of Mahomes or Brady winning Super Bowl MVP need to be in order to have an expected break-even bet at those payout odds.

For this analysis, we also use the Super Bowl win odds for each team. At post time, the Chiefs were favored by 3 points in the betting markets. Our models are in line with the market, projecting Kansas City with 59% win odds and Tampa Bay at 41% win odds. (3-point NFL favorites historically win around 60% of the time.) That’s also why Mahomes is the MVP favorite over Brady.

Those conditional odds (87% for Mahomes and 84% for Brady) are both slightly higher than the 82% of the time that a QB has won Super Bowl MVP in games with high expected scoring. So at first blush, it seems like there may not be value here.

However, the over/under line for Super Bowl LV is on the high end of those games, and Kansas City’s passing attack, especially, is better than the average passing offense in the most similar past Super Bowls. So there’s an argument to be made that the payout odds for these QB’s that we used above are at least fair.

Then, line shopping comes into play. On Tuesday 1/26, you could bet Mahomes to win MVP at +100 at DraftKings and BetMGM, and Brady to win MVP at +220 at FanDuel. Those better payout odds push into clearer value territory.

The better early bet, though, appears to be that a quarterback from either team will win Super Bowl MVP.

As of Tuesday 1/26, though, you could get payout odds on a prop that either QB wins MVP at between -275 and -305. The break-even win percentage for -275 payout odds is only 73.3%, and those odds are in line with the overall recent rate of QBs winning, where 8 of the last 11 Super Bowl MVPs have been quarterbacks.

That seems conservative, though. Based on the current high over/under of 56.5 for Super Bowl LV, we project it closer to 85% that a quarterback wins MVP in this year’s type of matchup.

If you agree, there would be value in betting the “Quarterback to win Super Bowl MVP” prop all the way up to -550 payout odds or better.

Wide Receivers Need Their Quarterbacks Not to Play Great, Yet Still Win The Game

Yes, four of the last 20 MVPs have been wide receivers, and while no tight end has ever won the Super Bowl MVP Award, Travis Kelce puts up numbers like a wide receiver and just set the single-season tight end yardage record.

So the biggest problem for Tyreek Hill or Travis Kelce winning the MVP Award is each other. They have both had over 100 yards receiving in each playoff game. But if they do that again, and Mahomes throws lots of passes to both, Mahomes is going to get a lot of yards and likely win MVP. The same is true, to a little lesser extent, of Mike Evans and Chris Godwin for Tampa Bay.

If you think a wide receivers or tight end will have a big statistical game in Super Bowl LV, you are probably better off wagering on specific yardage or scoring props for those players. It would likely take an absolutely monster game to win MVP.

Running Backs Appear Overvalued Across The Board

Last year, we saw 49ers RB Raheem Mostert rocket up the Super Bowl MVP odds board after big his performance in the NFC Championship Game, as the third-favorite behind the two quarterbacks. He finished with 58 rushing yards in the Super Bowl.

Some other facts to consider regarding running backs:

Six of the seven running backs to win Super Bowl MVP are now retired and in the Pro Football Hall of Fame, and the seventh is Ottis Anderson, who is 30th all-time in career rushing yards.

The position has been devalued generally in the NFL in recent years, and we are dealing with two situations that look likely to be platoon splits in Super Bowl LV.

The current odds imply that the four top running backs entering this game have between a 2% and 4% chance each, and about 11% collectively, of winning Super Bowl MVP. That seems too high given recent historical trends and matchup factors this year.

Is it likely that any non-quarterback wins Super Bowl MVP? No.

But when it comes to the best bang for the buck, or if you are just looking for a long shot play to give you a small rooting interest, consider going with a defensive player.

Here’s a summary of the last four defenders to win Super Bowl MVP:

Both quarterbacks in Super Bowl LV are among the league’s best at avoiding sacks, so the better play is probably to play on the possibility of game-swinging turnovers and/or someone who can be involved in lots of plays.

On 1/26 you could get Tampa Bay linebackers Devin White at +10000 and Lavonte David at +20000 at BetMGM, and Kansas City safety Tyrann Mathieu at +5000 at FanDuel. These are obviously huge long shots, but if you wanted to throw a few bucks at a prop with a windfall level payout, those three options are worth considering.

Where To Bet On Super Bowl MVP Props

Have a MVP prop bet you want to make? If you’re in a betting legal state, it’s worth taking the time to shop lines available at one of the leading online US sportsbooks. The four below all offer great signup deals: 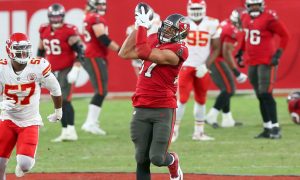 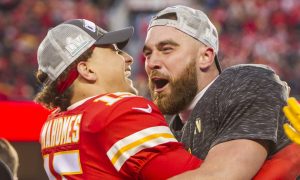 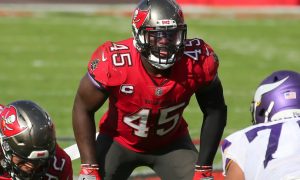