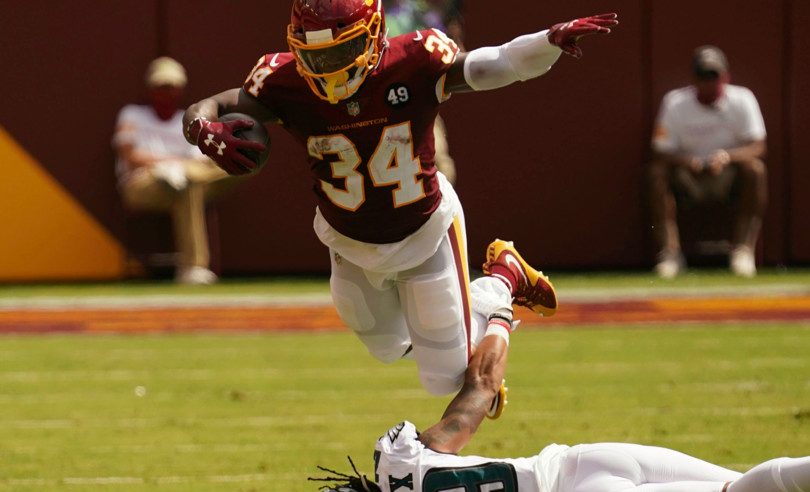 Welcome to our first NFL betting recap of the 2020 season. In this weekly post, we will go over some of the big results from the past week’s action, and some notable trends or areas of interest.

For example, because of the lack of crowds at most NFL games this year, we will be tracking how the lines seem to be valuing home field advantage, as well as the performance of home teams. To search for your own NFL betting trends, we also invite you to use the beta version of our BetIQ Trend Finder Tool.

NFL Week 1 By the Betting Numbers

Some notable outcomes from Week 1:

Which of the Week 1 Upsets is Most Concerning?

Two of those underdogs that won had our lowest projected season win totals entering the season. So what can we glean from these surprising results?

The Bears came back from a 23-6 to beat the Lions, with the help of three fourth-quarter touchdown.

Same old Lions? Maybe, but Mitch Trubisky’s late resurgence was also aided by injuries in the Detroit secondary. The Lions were already without first-round pick Jeff Okudah at cornerback, inactive with an injury.

The two starting cornerbacks, Justin Coleman and Desmond Trufant, also both left the game with hamstring injuries, leaving Detroit depleted in the second half.

This will be a situation to monitor this week, as Aaron Rodgers and Green Bay are up next.

There were 8 home favorites and 8 home underdogs in Week 1, and the average point spread was -1.2 in favor of the home team. Meanwhile, home teams outscored road teams by 48 points (3.0 points per game) in Week 1.

In this section each week, we will list a summary of drives that ended with turnovers. But not only will we list official turnovers like interceptions and fumbles, but other high-leverage, singular events that likely led to either loss of points, or great field position for the other team. Safeties and blocked punts are included in turnovers, and blocked field goals are included in missed field goal attempts.

Most of the teams at the top of the table lost (and failed to cover) while most of those at the bottom won (and covered). It’s notable that Buffalo covered the spread against the Jets despite having more drives end by these failures. New York might be a really bad team if they cannot cover while getting some missed field goals and benefiting from more turnovers than their opponent.

Here’s a running tally of how overall NFL scoring so far in 2020 compares to the full season averages of recent seasons, based on average total points scored per game.

Here is a summary of records against the point spread and over/under results so far in 2020. You can check out more trends on our BetIQ NFL betting trends page.