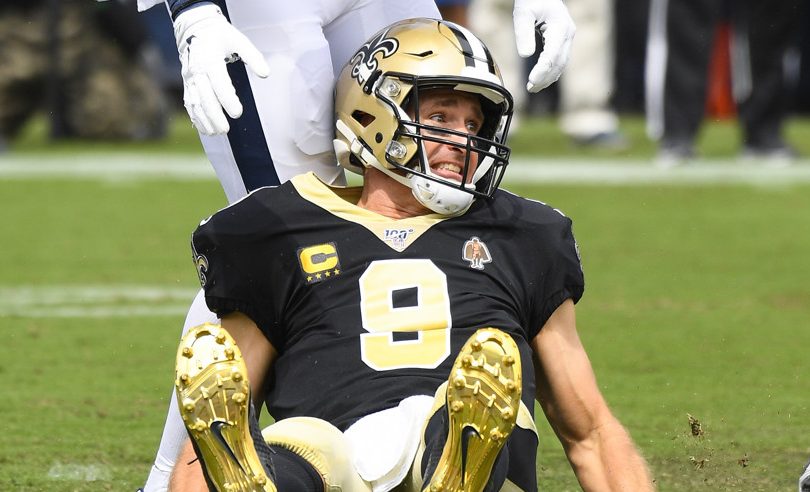 With the exception of Baltimore and New England, last week featured more matchups that were expected to be close games according to point spreads. And as it happens, the result was some notable minor upsets and several close games:

In total, nine of the 16 games last week were decided by one score. Then there were the Dolphins, who managed to lose by 40+ points for the second straight week.

But the biggest story moving forward into Week 3 is what happened to two future Hall of Fame quarterbacks. Let’s dive into the details there.

New Orleans QB Drew Brees left the first half of Sunday’s Saints-Rams NFC Championship Game rematch after hitting his throwing hand on Rams’ defensive tackle Aaron Donald’s hand. Brees never returned, and according to Ian Rapoport, he has a torn ligament in his thumb that will require surgery. He will miss at least six weeks.

This is a massive shock to the team that had the best record in the NFC a year ago, given that Brees has missed exactly one game to injury since he first arrived in New Orleans in 2006. (He sat out two Week 17 games, including last year when the Saints had already clinched the No. 1 seed).

How much have the Saints relied on Brees always being there over the last 14 seasons? Well, Aaron Brooks was the last starting quarterback not named Drew Brees to win a game for the franchise, all the way back on November 27, 2005. And Philip Rivers of the Los Angeles Chargers and Eli Manning of the New York Giants are the only two quarterbacks to start more games than Brees since the start of the 2006 season.

QB Ben Roethlisberger, meanwhile, left the Seahawks-Steelers game in the first half as well, after reaching for his elbow after a throw. On Monday, it was announced that the 37-year-old Roethlisberger would miss the rest of the season and need elbow surgery.

The Saints’ Options with Brees Out

New Orleans is paying QB Teddy Bridgewater $7.25 million this year, which makes him the highest-paid backup quarterback by average annual salary. In fact, Bridgewater is making more this season than several starting quarterbacks on their initial rookie deal, including Patrick Mahomes and Deshaun Watson. The Saints have invested in the position in the event something happened to Brees, and now they’ll see if that investment was worth it.

Bridgewater has been unimpressive in limited action so far with the Saints, however. He has averaged just 5.3 yards per attempt and thrown only one touchdown pass in 53 attempts with New Orleans (Week 17 last year, and in relief in Week 2). Even before his knee injury before the 2016 season in Minnesota, Bridgewater looked like more of a game manager, with low TD rates.

If Bridgewater continues to falter, the Saints also have utility man Taysom Hill as a hybrid weapon and potential backup quarterback. It would not be a surprise if Payton made some offensive adjustments to give Hill more looks.

The Steelers’ Options with Roethlisberger Out for the Year

Pittsburgh, unlike New Orleans, does have some recent history of dealing with Roethlisberger absences, though not the length that he will be gone for this season.

Back in 2010, Roethlisberger served a four-game suspension to start the year. Pittsburgh was able to start 3-1 with Dennis Dixon and Charlie Batch at quarterback, finished 12-4 after Roethlisberger returned, and ended up reaching the Super Bowl.

In 2015, Roethlisberger missed four games with a knee injury. The offense struggled with Landry Jones at quarterback but managed to split his four starts, and the Steelers still reached the playoffs at 10-6.

Pittsburgh drafted QB Mason Rudolph in the third round last year, and he will now become the starter. (Here’s some info on how backup quarterbacks have done against the spread in their first mid-season start, by the way). Ironically, the Steelers had just traded away another backup quarterback, Joshua Dobbs, to Jacksonville last week, and will now need to make sign someone else to back up Rudolph for the rest of the year.

What Recent History Shows When a Veteran Star QB Goes Out

Over the last decade, there have been eight cases that qualify as most similar to Brees and Roethlisberger, when a future Hall of Fame (or near HOF quality) veteran has to be replaced because of injury or suspension for at least four games.

Requiring at least four games played by both starter and backup to get a more relevant sample size (which obviously we are not getting with Roethlisberger this year) yields the following historical comps:

In looking at scoring differentials with and without those quarterbacks in those seasons, their teams were on average of 4.9 points better than opponents when those veterans started the games, and 1.2 points worse than opponents when they did not. That works out to a 6.1 point difference on average, with plenty of variability in specific cases. (Note: those are raw scoring differentials, and not adjusted for point spreads/opponent strength.)

The Early Spreads for Saints and Steelers

We saw the Jacksonville point spread move nearly six points against the Jaguars over the course of the week after QB Nick Foles’ injury. The Jets-Cleveland line moved four points in the Browns’ favor once the news about quarterback Sam Darnold’s illness broke.

In both those cases, it was easier to see the impact of the quarterback changes on the spread. Jacksonville’s next opponent, Houston, had not played a game yet, so any adjustment from the preseason line was more likely related to the quarterback news. In the Jets’ case, a point spread for Week 2 had been established, and the line moved only after the news about Darnold came out.

This week, the Seahawks have opened as a 4.5-point favorite over the Saints, while the San Francisco point spread started at -7 against Pittsburgh. Both games were listed as even Pick’ems in the look-ahead lines before the season.

However, with every team now having played two games, it’s harder to say how much of those line changes are attributable to quarterback changes as opposed to general performance over the first two weeks, or still other factors. San Francisco and Pittsburgh in particular have started in opposite directions, with the 49ers winning (and covering the spread) in both of their games so far, and the Steelers losing (and failing to cover the spread) in both of theirs.

Other Key News Heading Into Week 3

Enjoy NFL Week 3, and if you’re in an NFL pool or planning on betting some of the Week 2 games, please check out our NFL Survivor Picks, Football Pick’em Picks, and NFL Betting Picks. 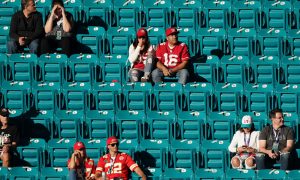