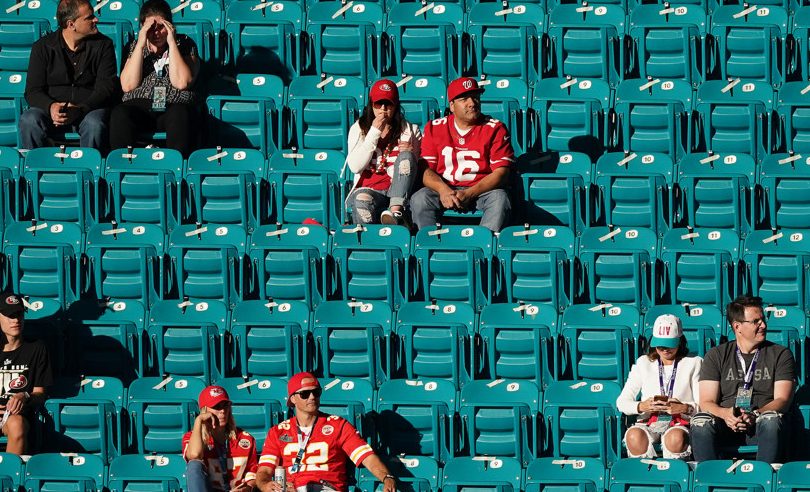 The NFL could play games in 2020 with either no crowds or with restrictions on crowd capacity due to the coronavirus pandemic. How might drastic changes in crowd size at games impact home field advantage in the NFL in 2020?

The purpose of this article is to go through some existing relevant research and provide some possible answers.

Home Field Advantage in the NFL

NFL home teams won 52.0% of their games in the 2019 season. That was actually the lowest win percentage for home teams in any season of the last 20 years.

For one-third of the seasons since 2002, home team win percentage for the year was at or below 54%, or at or above 60%. This amount of statistical noise means that even if we get a season without fans, or with greatly reduced crowd size, we’ll never be sure of the true impact.

(Hypothetically, let’s say that home teams won 56% of the time in 2020. That would not prove that crowds had no impact on home field advantage, because we wouldn’t know what the win percentage would have been otherwise.)

Beware Comparisons to Other Sports

Other sports are also resuming, without fans in attendance. Some of these are taking place in neutral field or court situations. Others will use the home venues, but without fans.

And you also need to be careful looking at what happens in other sports that resume after COVID-related suspensions. The German Bundesliga, for example, was the first soccer league to return to play in May, and home teams are indeed winning at a lower rate without fans in attendance, than they were before the shutdown.

However, all the Bundesliga teams come from a geographical area roughly the size of Illinois, Indiana, and Ohio combined. All are located in the same time zone. These are factors that are not present in many NFL matchups, where teams can routinely travel outside their home time zone and for much further distances, and play in vastly different climate conditions (or inside domes).

A fair amount of research has been done looking at potential factors that contribute to NFL home field advantage. Let’s go through some of the research.

Prevailing conventional wisdom is that NFL crowds have a great impact on home field advantage. The evidence, though, is less clear. For example, one of the commonly-cited examples of home crowds making a difference is road teams committing false starts when the home crowd makes it difficult for players to here. But home teams actually commit slightly more false starts than road teams.

Some fanbases build their reputations on crowd noise, such as Seattle’s 12th man. Seattle has shown one of the larger home-road splits over the last 20 years. But Seattle also has something else that could be a factor: geographic isolation compared to the rest of the NFL. Since the team moved outdoors in the early 2000’s, it also plays in a unique climate — typically cooler and damper than most locations early in the season, but not the same as the cold weather venues in the upper Midwest and Northeast in the winter.

Officiating seems to contribute to home field advantage. Crowds can indirectly play a role here. Humans could be unconsciously influenced by crowd responses. This bias can manifest in smaller decisions, such as the spotting of a football or making a discretionary judgment call on whether a foul was committed during the action of the play.

For example, Tobias Moskowitz observed in the book Scorecasting:

Moskowitz was also recently interviewed in an article appearing on CBS about the effect of crowds on home field advantage. “This is the great experiment,” he said. “We might be about to see this experiment played out in grand scale over many sports starting this fall. And look, if I’m right, you’ll see the home-field advantage drop considerably. I don’t think it’ll disappear, but I think it’ll go down by more than half of what it’s been historically.”

Some of the strongest research about the impact of officials is from soccer. Unlike the NFL, one soccer referee is in charge of calling the entire field, and decisions on fouls can be extremely high leverage in terms of determine game outcomes (e.g., awarding a penalty kick). The research on NFL replay also dates back to the 1990’s, and we know that home field advantage has gone down even since then, so officiating bias may be already reduced compared to that time period.

NFL games take place in a variety of weather conditions, and even indoors in temperature-controlled environments. Different teams have different home climates, some of which are vastly different from what the visiting team normally experiences.

As this post shows, the performance of home teams (both underdogs and favorites) improves as the actual game temperature decreases incrementally below 50 degrees Fahrenheit. A research article by Richard Borghesi in 2007 also looked at home team performance based on game day temperatures and the difference between the two teams’ typical playing climate. Borghesi observed home advantages due to weather that were not being properly priced by the betting markets.

We have seen home field advantage numbers decrease in recent years compared to what they were thirty or forty years ago. Over that same time, we have also seen expansion in the number of warmer climate teams and domed stadiums. Divisions changed in 2002, improving geographical proximity and accuracy of division assignments. (For example, Tampa Bay used to play in the NFC Central with the teams of the current NFC North; Arizona is no longer playing division games in New York, Washington, and Philadelphia.)

As noted in this research piece by Robby Greer, home field advantage in division games is lower than in other types of NFL games. That is consistent with our findings about the differing performance of teams in division games. Our research went further and separated out division matchups that featured rivals in close geographic proximity who both played outdoors.

Here were the results for home teams, from 2002 to 2019. (“CPOR” stands for Close Proximity Outdoor Rivals.)

Climate is likely playing some role here. But all division games show reduced home field advantage, even those not in close proximity.

One potential explanation is that road team familiarity plays a role in reducing home field advantage. Division rivals play every year, in both home and away venues, while teams more infrequently visit venues outside the division. Sometimes, they can go years between playing in the same stadium. For AFC versus NFC matchups, teams only play in stadiums in the opposing conference once every eight years.

The division performance of close proximity rivals gives us some evidence to make some educated guesses. Home teams only win 52.8% of the time when the opponent is not at a large disadvantage in terms of familiarity, travel distance, or climate. It’s unlikely that crowds are quieter in those divisional games. The reduction in home field advantage is probably due to other factors, not the impact of crowds.

So What Will the Likely Impact on NFL Home Field Advantage Be?

The 52.8% win rate in close proximity division games equates to about a 1.5 point advantage for the home team. The rest of home field advantage, which has been about 2.4 points on average, and closer to 3 points in non-divisional games, is more likely due to those other non-crowd-related factors: familiarity, climate, travel, time zone changes.

The five closest divisional matchups between outdoor rivals are the Philadelphia Eagles against both Washington and New York, Cleveland vs. Pittsburgh, New England vs. the Jets, and Chicago vs. Green Bay. The home team is 88-87-1 straight up since 2002 in those series. Those are the matchups where travel time is shortest, and climate is most similar. Home field advantage has been virtually non-existent in those games, even with crowds.

If reduced crowds have any impact, it will most likely be reflected in reduced officiating bias. No study has formally measured the scoring impact of any NFL officiating bias recently. But based on the evidence above, our best guess is an average impact somewhere between 0 and less than 1 point, out of the typical 2.4 points of home field advantage.

Early DraftKings look-ahead NFL lines for the 2020 season include 14 different division series with a line for both matchups. The average spread difference across those matchups is 5.2 points, or +2.6 points for the home team in each game. Current betting limits on future 2020 season NFL games are typically low and don’t expose sportsbooks to much risk. But at this point in mid-June, the betting markets do not seem to be making a big home field adjustment. 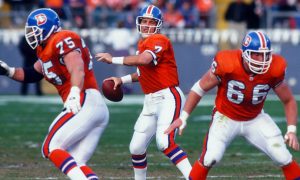 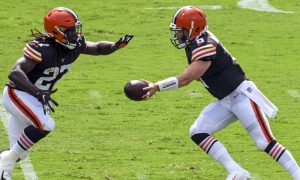 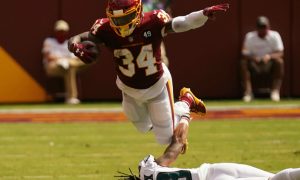