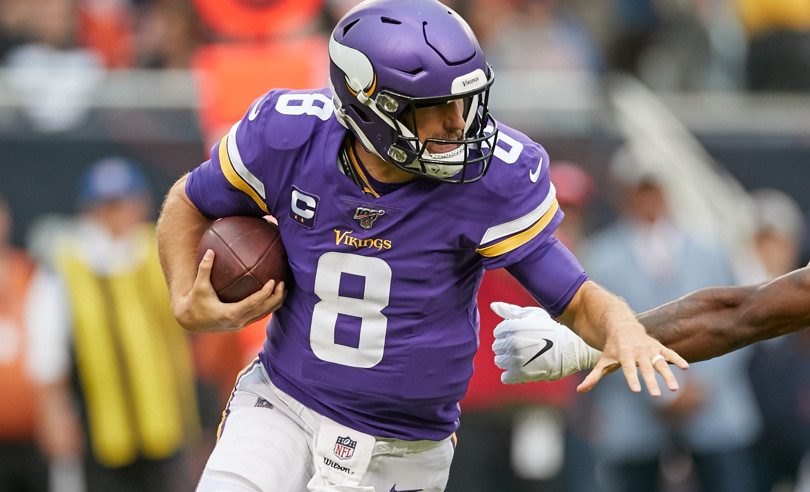 Upsets took over the NFL last week, as underdogs in the betting markets finished the week 9-6 straight up. That’s right — the favored team lost outright more often than it won.

The Buccaneers win over the Rams was the biggest upset of the week, but the Browns beating the Ravens, the Raiders winning at Indianapolis, and the Eagles beating Green Bay were also among the many upsets in Week 4.

Here’s a crazy-but-true stat: so far in 2019, NFL teams favored by less than a touchdown have lost more than they have won (21-24-1). Based on implied win odds from the betting markets, you would have expected more than seven additional wins from those teams (28.6 expected wins total). Have the oddsmakers gotten worse at their jobs in 2019? Or is this simply the result of random chance, where upsets can appear to be the rule and not the exception over a smaller sample size?

Our educated guess is the latter, and if so, the high number of upsets to open this season presents an opportunity this week. As we will explain in this post, pretty much everyone took a beating in their pick’em contests last week, and the public now seems to be getting more aggressive in terms of picking underdogs.

The value picks we highlighted in this post last week went 1-4, which normally sounds pretty terrible, but not so much in a week where chaos reigned. Of the three teams we highlighted that were favorites early in the week (Baltimore, Chicago, Denver), our picks went 1-2, but in comparison, the public only got 1.1 wins on average from those games. So it was pretty much a wash, and we were one final Denver defensive stand away from a much better week than the public on those games.

It was a worse week for the upset picks we highlighted, as neither Washington nor Cincinnati came close to winning. However, that’s also why they are called the “gambles” that aren’t suitable for all pools. Based on win odds, you would have only expected 0.8 wins total from those two teams, so a week in which neither win is never a huge shock.

(It also ended up just being a bad luck week for us in terms of which value upset picks we highlighted in the post. For example, our “Quick Picks” subscriber pick sets for winning weekly prizes also recommended three upset winners in Philadelphia, New Orleans, and Tennessee, in addition to the losses on Washington and Cincinnati. So on balance, our subscribers looking to take more risk actually did well with our pick recommendations, compared to the public.)

Based on the public pick percentages for all 15 game winners last week, you’d expect the “average” public pick’em contest entry to have gotten only 7.2 wins, so it was an under .500 week for many office pool entries. As far as our Football Pick’em Picks product is concerned, our picks for season prize strategies in the “Quick Picks” subscriber pick sets got seven games correct, while our reference pick sets for weekly prize strategies all got at least eight picks right.

So the early trend of many upsets in games with smaller favorites has continued a very strong start for our “weekly prize strategy” pick recommendations. Subscribers using those picks have reported winning a weekly prize 12.3% of the time so far in 2019, a rate 2.5 times what you would expect for the average participant in the same pools.

Keep in mind that we are not saying that you should make five of the picks below — the Value Gambles especially. The best Week 5 picks for your NFL pool depend on characteristics such as its size, rules, and prize structure; our Football Pick’em Picks product will recommends weekly picks for you based on all those factors.

What we are saying is that the teams mentioned in this post either offer some of the best opportunities to differentiate your Week 5 picks from your pool opponents, or they serve as prime examples of when picking against the crowd is most likely a bad idea.

Week 5 features several teams that the public is picking at a lower rate than their chance to win, which is a change from the past four weeks. These types of teams are as close as you can get to “no brainer picks” in NFL pick’em contests, since both win odds and value are on your side. Here are three of them:

The Vikings were a popular choice last week to beat the Bears on the road, and lost. The Giants were a popular choice to beat Washington, and won. So it’s pretty easy to see why the public is relatively down on the Vikings this week and high on the Giants. The Vikings, though, are a 5.5-point favorite, and have a 69% chance of winning according to our models. The public is picking Minnesota 68% of the time, so you are getting a pretty solid favorite being picked slightly lower than their true odds.

That may not sound like a huge value, but consider this for perspective: there have been nine other games so far this season in which a team was favored by 5 or 5.5 points. On average, the public picked the favorite 89% of the time, and never less than 84% of the time.

Cleveland is back, baby! The Browns rebounded with a huge win over Baltimore, and it looks like the public is now ready to re-embrace Baker Mayfield and company after their opening week shellacking by the Titans. Meanwhile, San Francisco was on bye last week. The public has a short memory, and out of sight often means out of mind, so it’s easy to forget that San Francisco is 3-0 and playing at home. The 49ers are favored by 3.5 points and our models give them a 65% chance of victory, while the public is picking San Francisco 64% of the time. Again, may not seem like a huge value, but relative to how the public normally treats favorites, it definitely makes Cleveland an unwise upset pick.

Has the public been burned by Tennessee being so unpredictable? Probably. The Titans have won twice as underdogs and lost twice as favorites, so the public has averaged getting 0.6 picks right in games involving Tennessee this year. The Titans are a 3-point favorite here yet the public has swung the other way and is taking the Bills 52% of the time. Buffalo put up a fight against New England in Week 4, which likely made an impression with the public. But Bills quarterback Josh Allen did sustain a concussion on Sunday and his status for this game is still to be determined, so we could see some movement in both the line and public popularity in this one.

Most favorites are overrated by the public, but the team below looks more fairly valued in Week 5. You should think twice about picking against them, not because we think they are a lock to win (we certainly don’t), but because other games offer more compelling upset pick opportunities.

The Cowboys are just one of several favorites that are more fairly valued than usual, and are being selected by the public at far lower rates than similar favorites in recent weeks. (An upset loss to the Drew Brees-less Saints in primetime on Sunday night is likely one reason why.) Dallas is a 3.5-point favorite at home, our models give them a 64% chance of winning, and the public is picking them 65% of the time. On average, the public is picking about one more upset in Week 5 than they have until now, so it makes sense to favor playing more favorites like Dallas this week.

The pick below is not appropriate for all pools. If you’re in a smaller, season-long pool with lots of games left, it’s probably not worth the risk. However, if you’re in a single-week pool with a larger number of entries, or if you only care about winning weekly prizes, this highly unpopular underdog has a compelling profile.

While the public has generally leaned toward picking more upsets, there is one slight favorite that they are backing heavily. New Orleans is favored by only 3 points, tied for the second-smallest favorite this week. However, the public is picking them 84% of the time, which is the sixth-highest pick rate this week for a favorite.

New Orleans has won consecutive games as an underdog with Teddy Bridgewater at quarterback, but the offense has not been particularly impressive (less than 200 passing yards each week). Meanwhile, Tampa Bay is coming off a big road upset of the Los Angeles Rams. The Bucs have put up a combined 963 yards of total offense and have scored 86 points the last two weeks. Those factors explain why New Orleans is only a small favorite in this one, but the public is still very supportive of the Saints. In some pools, there is value in going contrarian against the one small favorite the public is treating more like a sure thing.

Once you know the best value opportunities of NFL Week 5, you can typically increase your odds to win your pool by making educated gambles on them. Perhaps you bump up the number of confidence points you assign to a pick like Minnesota or Tennessee. Maybe you take even more risk and pick a team like Tampa Bay to get a big win two weeks in a row. There are a lot of decisions to make, but not all of them make sense for you.

Enjoy NFL Week 5, and if you’re in an NFL pool or planning on betting some of the Week 5 games, please check out our Football Pick’em Picks, NFL Survivor Picks and NFL Betting Picks.