Last week I looked ahead at this year’s NCAA tournament using a balloon plot and the TeamRankings.com bracket predictions.

In this post, I’ll look back to past NCAA tournaments and relive some of the “Madness”.

In order to visualize some of the recent NCAA tournaments, and highlight the lower seeds that have made deep runs, I created something I’ll be calling a “Cinderella plot”. 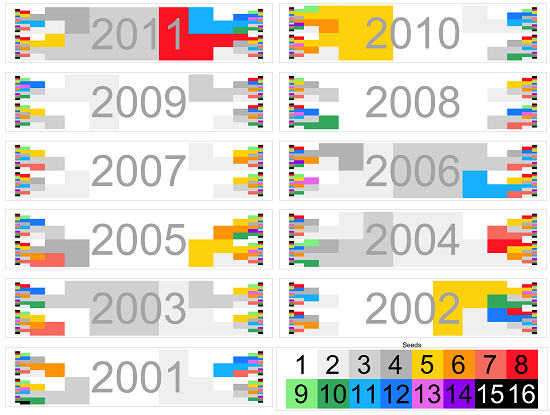 For example, in 2008 all four #1 seeds made it to the Final Four, so the entire middle of the chart is white. Only one team that year with a seed lower than four, #10 Davidson, made it to the Elite Eight.

Similarly, 2007 and 2009 are mostly white and gray indicating that there were few Cinderellas. In both those years, no team with a seed lower than #3 made it to the Elite Eight, and in 2009 only two teams seeded lower than #4 made it to the Sweet Sixteen: #12 Arizona and #5 Purdue.

The Last Two Years Have Been Crazier

More recently, in 2010 and 2011, one could reasonably look at the brackets and conclude that there has been more “madness”.

The 2010 graph is dominated by gold on the left, and there are some greens and blues on the right. The gold sections belong to Michigan State and Butler, two #5 seeds who met in the Final Four with Butler ultimately losing (barely) in the finals.

There’s no other way to describe it. 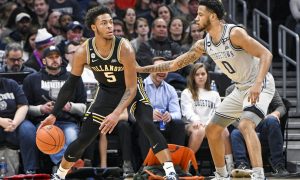