On Monday we looked at Kentucky’s path to the 2015 NCAA Championship.

Now let’s take a look at the Selection Committee’s overall 2 seed, Villanova, using the projections we generate while calculating our optimized bracket picks.

Not surprisingly, Nova’s chances to cut down the nets are much lower than Kentucky, and not just because Kentucky is their most likely opponent in the Championship Game.

Villanova’s Odds To Win Each Round

With the 2015 bracket now out, we’ve released round by round survival odds for each team that made the tournament. We can use that data to determine the chances Villanova wins in each round, if they make it there:

Some indications from the chart above:

Villanova’s Odds against the East

Using our matchup tool, we can examine the odds of a team to win against any other opponent. Charting Villanova’s odds against their opponents in the East shows: 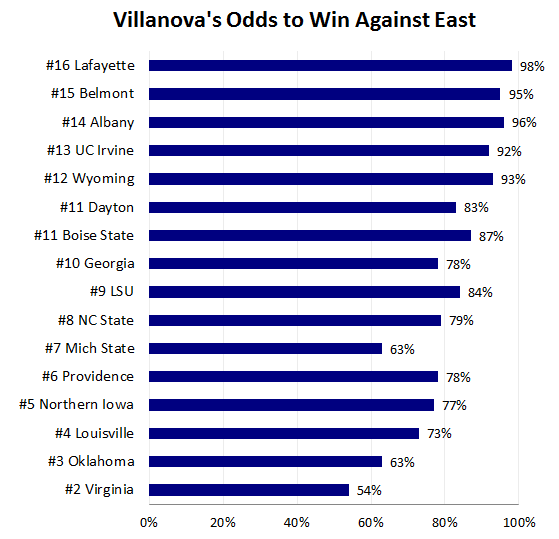 Villanova’s Odds against the Top Seeds

We can also look at Villanova’s odds against the top seeds in the tournament:

The real question, though, is this: How far should you pick Villanova in your bracket pool, given your scoring system and other details? Here’s how to find out.