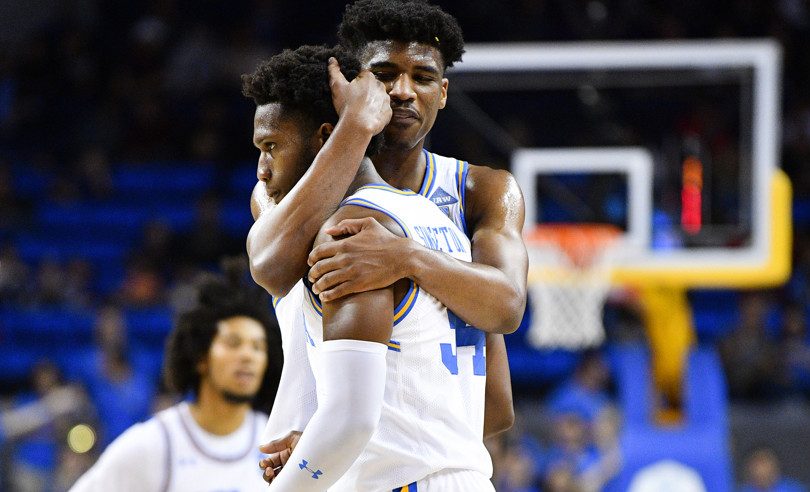 UCLA came back and won against Arizona State on Thursday with a last-second shot. That moved the Bruins into a first-place tie in the Pac-12 with only two games remaining. On Saturday, they followed it up with a home win over Arizona.

UCLA, though, isn’t highly thought of as a NCAA Tournament team. In the Bracket Matrix, only two of 94 brackets had them in the field as of Friday following the Arizona State win. Three days later, just over half of the brackets had moved them into the field.

The Bruins started their season only 7-6 in the non-conference in head coach Mick Cronin’s first year in Westwood, and had no quality wins entering conference play. They also started Pac-12 play 1-3 to drop to 8-9 overall by mid-January. Since that point, though, they have been hot, winning 11 of 13. That includes a sweep of Colorado and Arizona, and the victory over Arizona State.

So in this post, we’ll review UCLA’s case based on recent committee decisions.

[For full breakdown of the 2020 NCAA Tournament Bubble, click here]

However, what they do have is “Quadrant 1” wins. UCLA is currently 6-6 in Quadrant 1, including top tier road wins at Colorado and Arizona. They are also 3-3 in Quadrant 2 games, for a combined record of 9-9 in those quads.

Their remaining games will likely all be Quadrant 1 (or at least Quadrant 2) contests. They close against USC in the regular season. They would then likely face a potential Quadrant 1 team in the Pac-12 tournament bracket.

It’s an unusual profile, especially given their start to the season, but it’s not completely unprecedented. Let’s take a look at recent history to see some similar decisions.

The list of comparable teams was put together by finding all teams since 2011 that met the following criteria:

Using the projected results for UCLA’s remaining games, the list is ordered by teams most similar in Quad 1, combined Quad 1 & 2, overall record, and NET/RPI ranking.

Here are the teams:

Looking over that list, UCLA appears right on the bubble’s edge, capable of either just getting in or being made a NIT #1 Seed.

That list contains teams that were right on the cutline, and includes some notable and controversial (read: a lot of bracketologists had them out) choices.

In fact, the three lowest teams by RPI/NET ranking since 2011 to get at-large bids show up on UCLA’s list of similar teams.

If UCLA finishes the year, say, 19-13 by closing with a loss to USC then a loss in the Pac-12 tournament, they will have six Quad 1 wins and be right in line with these past bubble teams. Who knows which way the wind will blow with this particular committee? But based on recent history, UCLA will be one of the most discussed and debated teams as we move toward Selection Sunday.