The Importance Of Seeding (Part 2): A Bad Draw Can Cut Your Favorite Team’s Final Four Chances In Half

[This article is a guest post conceived of and written by Monte McNair. Monte analyzes both college basketball and college football at his blog Outside The Hashes, can be found on Twitter at @OTH_blog, and was a member of the 2012 Stat Geek Mock NCAA Tournament Selection Committee.]

Yesterday’s post broke down the factors that determine how difficult the path to the Final Four is from any given seed line.

What we learned was that making it out of the first round was heavily influenced by the uneven distribution of team strength, and the fact that automatic bids let in teams of lower quality.

But the NCAA tournament doesn’t end after round one. Does the advantage of a high seed carry over into the later rounds?

As you’ll recall from yesterday’s post, taking an average NCAA tournament team and simulating their path through the tournament from any seed line allows for the pure effects of seeding to be examined.

This is different than looking at historical data — by holding team strength constant, we’re ensuring that any effects we see are the result of the seeding itself, not of a team’s inherent strength.

The blue line below is the Path Difficulty — the probability of advancing past the 2nd round. It’s plotted against the vertical axis on the left. The red line is the Expected Wins through the first two rounds. 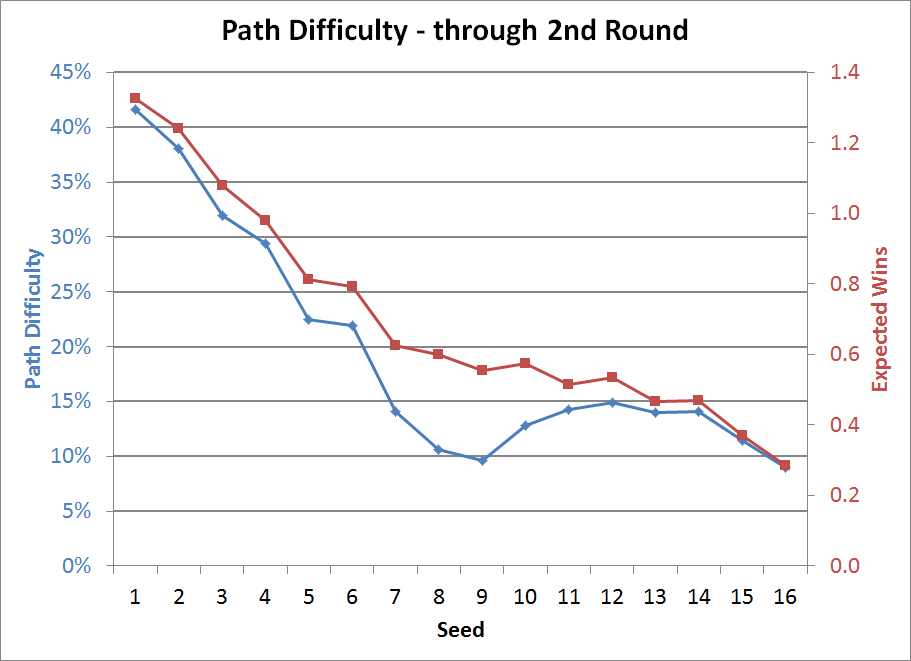 The big takeaway is that in terms of reaching the Sweet 16, the only thing worse than being in the 8/9 game is being the #16 seed. As you can see with the blue line, being the 8, 9, or 16 seed all give similar chances of winning your first two games as you basically have to beat the #1 seed and either the #8 or #9 seed.

However, many teams will value winning one game, so the order of playing those games matter. The red line reflects this as the 8 and 9 seeds don’t have to play the #1 seed until the second round, so their expected wins is higher.

Again, we also see the benefit of receiving a top seed. An average tournament team would be over 40% likely to make the Sweet 16 as a #1 seed, over 10% higher than even a #3 seed and nearly double the chances compared to being a typical #5 seed. From the 7-seed up, teams should be fighting to climb the seeding ladder, but as we see, teams would actually increase their Sweet 16 chances by nabbing a 10-15 seed as opposed to an 8 or 9.

All of these seeds have more difficult paths than the 7/10/11/14 seeds. Their path is easier since the #2 and #3 seeds are not just worse teams combined than the #1 and #4/5 seeds, but also more likely to be upset giving an even easier matchup in the later rounds. 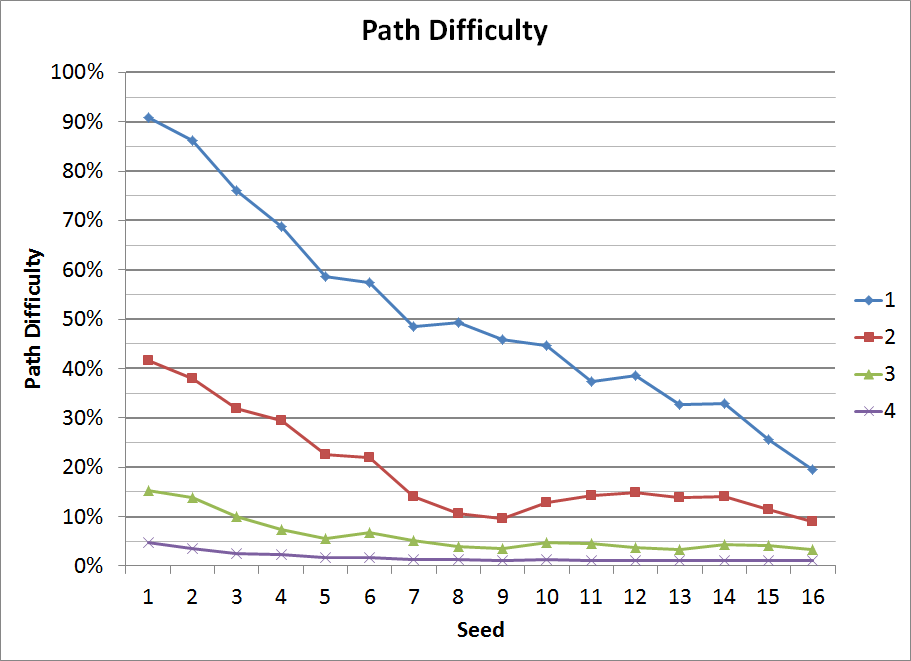 The purple line represents the Path Difficulty through the first four rounds, or, in other words, the chance of reaching the Final Four. Since all of these paths are difficult, they are dwarfed on the graph when compared to the other rounds. But focus in on just the odds of making the Final Four and we see the huge advantage for the top seeds. 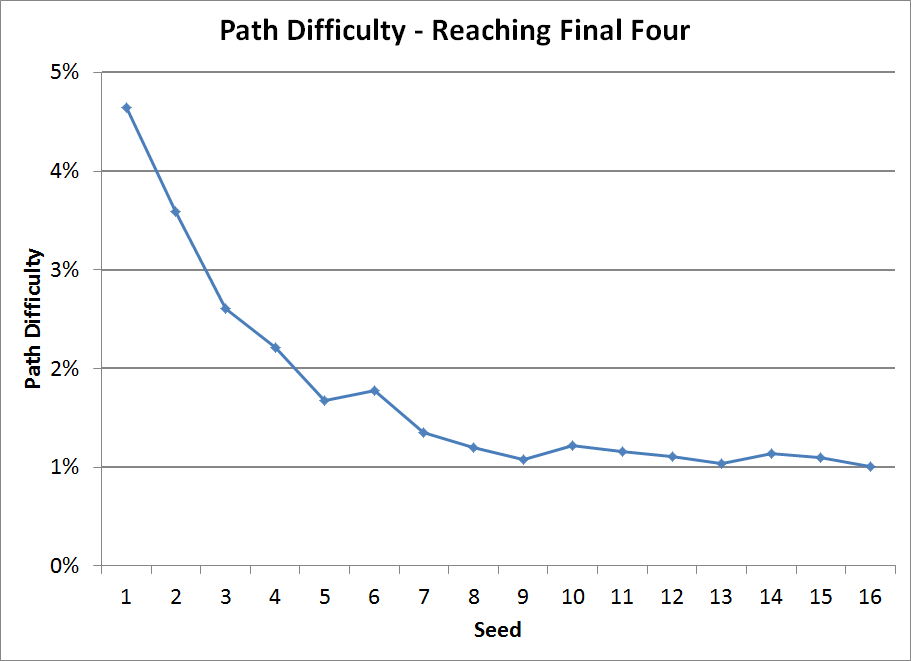 Moral Of The Story: Seeding Matters, A Lot

All of this analysis was independent of the quality of the team. Obviously the better seeds are given to better teams, but this allows us to try and isolate how much of the advantage is due to seeding and not just being a better team.

As we can see, the advantage is significant. Playing the weak champions of one-bid leagues in the 1st round gives top seeds a near-automatic win. Avoiding the other top teams until the later rounds — where you may even luck out and face a weaker opponent due to an upset — is another major benefit.

All those teams out there that are considered Locks, time to step up your game. Now’s the time to really bolster your NCAA Tournament chances by improving your seeding. Just stay out of that 8/9 matchup.