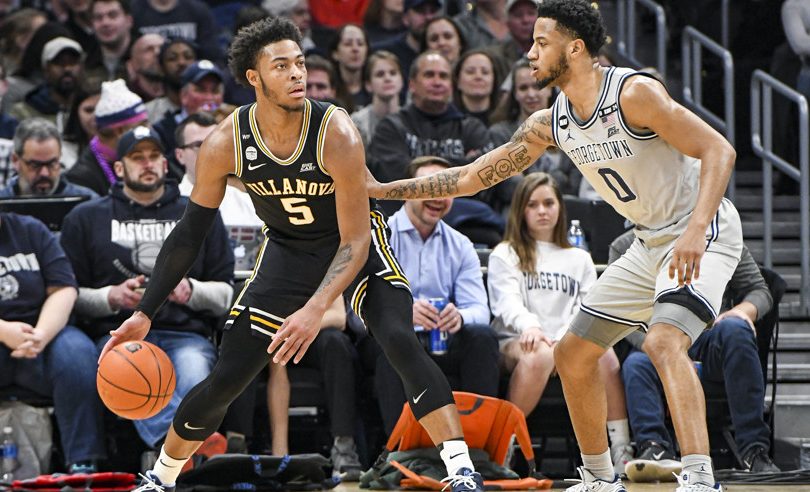 Villanova is one of several teams that should compete for a No. 1 seed (Photo by Mark Goldman/Icon Sportswire)

It’s College Basketball Season Eve! The 2020-21 season is going to be a challenge on many fronts, with games potentially being rescheduled canceled on a regular basis due to the coronavirus.

Despite those challenges, we won’t be deterred from providing our preseason NCAA tournament predictions before the season tips off tomorrow.

How Did We Do With Last Year’s Preseason Bracketology?

Before we get to the preseason 2021 bracket, let’s recap how last year’s preseason bracketology predictions did. Obviously, there was no NCAA Tournament last year, but some conferences did finish their tournaments, and the regular season schedule was completed. We’ll compare our preseason projections to the Bracket Matrix consensus as of the date the 2020 season ended.

So we weren’t perfect, but we didn’t expect to be — again, these are the results of NCAA tournament predictions we made before the first game of the 2019-20 season was even played. In the end, teams in our preseason bracket should have reached the tournament slightly more often than we expected, and our projections were better for the at-large quality teams than for the automatic bids. Overall, we think we did pretty well for November!

Now, on to our 2021 NCAA tournament projected bracket.

Preseason Projected No. 1 NCAA Seeds In 2021

Here are our projected #1 seeds in the 2021 NCAA tournament:

Gonzaga is the top team in our preseason ratings, and even though they aren’t significantly above the other three projected No. 1 seeds above in terms of predictive rating, they appear to have the clearest path to putting up enough quality wins and posting a good record that will garner the top seed.

After Gonzaga, there are seven teams that have roughly similar odds of getting a top seed. None of them have even a 25% chance of earning the top seed, but we have to put some teams in those slots, so here are our three most likely candidates.

Kansas is pretty much always in the mix for a top seed, and the 2020-21 season should be no different. The Big 12 is top heavy, which also means plenty of high quality wins available in an otherwise shortened regular season.

Baylor is basically in the same boat as Kansas. Last year, both were likely to be No. 1 seeds when the season ended. They are the top two teams in the Big 12, and that conference has five of the top 11 teams in our predictive power ratings. If those ratings hold up, the Big 12 conference getting two No. 1 seeds isn’t out of the question.

Villanova is our fourth projected No. 1 seed, just ahead of West Virginia, Duke, Virginia, and Michigan State. Villanova’s path is in many ways the opposite of the Big 12 teams. They are expected to be the class of the Big East, a conference that should feature several good (but no other great) teams. That fact could allow Villanova to rack up quality wins against Quad 1 and 2 teams in the NET rankings.

For comparison, last year we had six teams that we gave at least a 28% chance of getting a No. 1 seed. This year, there is only one, so the race for top NCAA seeds should be considered even more wide open in 2020-21 — and that’s before even considering the wackiness that cancellations and schedule changes on account of the pandemic could create.

Now, on to the rest of the bracket… 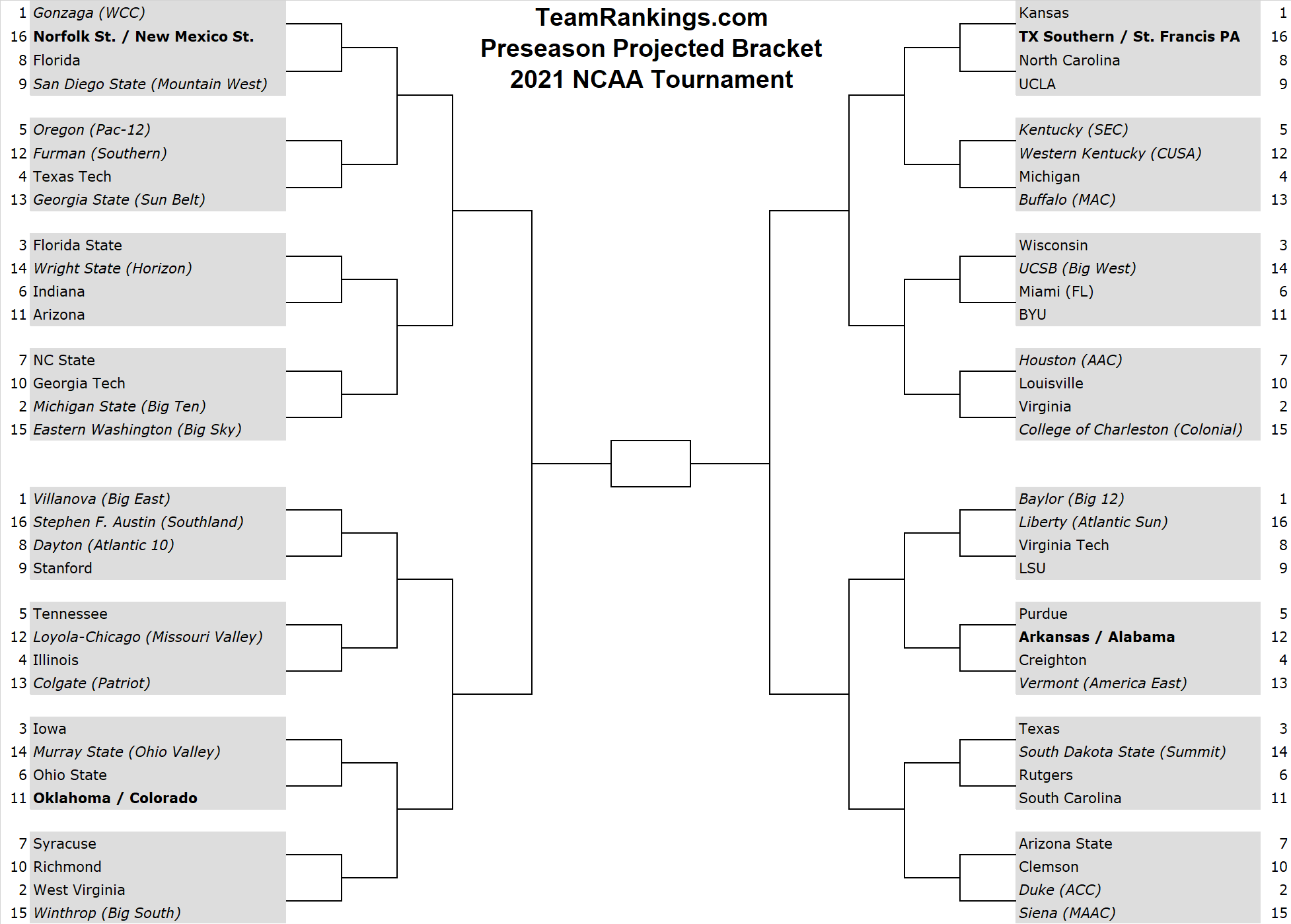 [Note: We’re not worried about following the NCAA’s bracketing rules here. We know that, for example, NC State shouldn’t play Georgia Tech in the first round. Our goal here is to show expected seed lines for each team, and give an idea of the rough quality of opponent they might face in each round. Trying to predict actual bracket matchups at this point is silly.]

Our NCAA selection and seeding model doesn’t directly produce the projected bracket you see above. Its output is actually a set of odds describing each team’s chance to make the NCAA tournament, and to earn each specific seed (among other info). The bracket is created at the end, based on those odds but also using a bit of manual intervention to assign teams to specific bracket lines.

What does that mean for you? It means you get to see lots of juicy data, if you so desire. Below you’ll find our official 2021 NCAA tournament preseason projected bracketology odds for every team, but other pages on our site will be updating various odds on a daily basis as each day’s game results come in:

Some Final Tips For Understanding Our Bracketology Odds

You might notice in the gigantic, 347-row table below that some power conferences have more teams projected in the field than others. For example, the Atlantic Coast has 11 teams in the projected field, while the Big East only has two.

Does that mean we expect 11 teams from the ACC Tournament to be in the tournament, and the Big East to get only two? No. But when projecting individual teams, several ACC teams have percentage chances just above the cutline, and several Big East teams are just below it.

For comparison, here is the number of teams appearing in the at-large bid range in the gigantic table (the top 47 teams, 37 at-larges plus 10 auto bids), versus the number of teams we expect from each conference when we add up each individual team’s chances of making the tournament:

So if you ask us how many teams will make the tournament from the ACC, and how many will make it from the Big East, we would say about 7, and about 4, respectively.

But if you asked us to project the specific field by individual teams with the best chances, we would have a few more ACC teams and a few less Big East teams. That’s because nailing the identity of the specific Big East teams is a little more unlikely outside of Creighton and Villanova, with several teams with odds between 25% and 35% each.

Here are our 2020-21 preseason bracketology odds for every team: 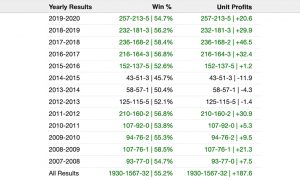