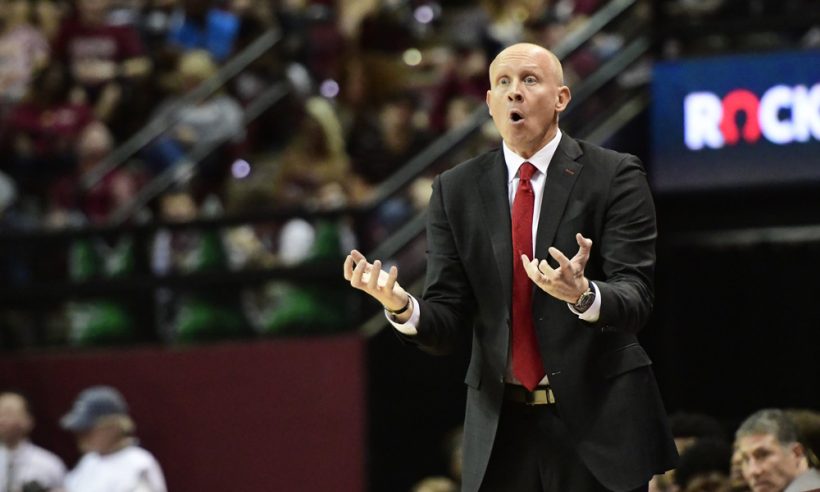 How Did We Do Last Year?

Before we get to the preseason 2020 bracket, let’s recap how last year’s preseason bracketology predictions did.

We weren’t perfect, but we didn’t expect to be. The teams in our bracket reached the tournament slightly more often than we expected, and our projections were better for the at-large quality teams than for the automatic bids. Overall, we think we did pretty well, for November!

Here are our projected #1 seeds in the 2020 NCAA tournament:

Michigan State is the clear top team in our preseason ratings, almost two points ahead of the second place team (that’s a big difference for a single place in the rankings), so having them as the overall top seed on our bracket makes complete sense.

Kentucky is the second place team in those ratings, so the Wildcats having the second highest one-seed odds is also unexpected. Their odds being nearly as high as Michigan State’s at first is a little surprising. But the SEC isn’t as deep through the whole conference as the Big Ten or Big 12, nor does it have a cluster of several potentially great teams like the ACC. So Kentucky is more likely to make it through their conference season with a gaudy record, which would be rewarded by the selection committee.

Gonzaga on the third line is more surprising, as they are only #7 in our preseason ratings. Wait, this sounds familiar. Check out what we wrote last year about the Zags:

Gonzaga on the third line is more surprising, as they are only #9 in our preseason ratings. Once you examine their schedule it makes more sense. They are expected to roll through the WCC, and are projected to enter the NCAA tournament with the fewest losses in the country, tied with Nevada. But while Nevada plays a nonconference schedule devoid of top ranked teams, the Zags have a couple chances to notch great wins (at UNC, vs. Tennessee).

Indeed, Gonzaga entered the tournament with only 3 losses, tied for the fewest (with Buffalo, Houston and Virginia), notched a great win over Duke in non-conference play, and nabbed a top seed. Their playbook is the same this season.

Louisville as the fourth No. 1 seed … now that one is intriguing. We rank the top of the ACC as (with predictive ranking): Duke (3), Louisville (5)  and North Carolina (6). Yet Duke is projected with only 28% top seed odds, compared to Louisville’s 29% (and it’s not just a simulation noise thing — we’ve re-run this several times).

It’s tough to say for sure since our model doesn’t produce reasons, only numbers, but we suspect Duke’s non-conference schedule may be working against them. Duke plays two marquee games against Kansas and Michigan State … and nobody else that should threaten them. There’s a pretty reasonable chance of going 0-2 in those games and having their non-conference resume be a big fat zero, in terms of good wins. Louisville only has one truly marquee matchup (Kentucky) compared to Duke’s two, but plays several more non-cupcake opponents (Texas Tech, Michigan … even Western Kentucky counts here, compared to Duke’s schedule). They’re more likely to get something positive from their non-conference slate.

Regardless of the reason, 29% vs 28% is not a big difference. Throw in North Carolina at 18%, and the model is basically saying that the best team in the ACC will likely get a No. 1 seed. 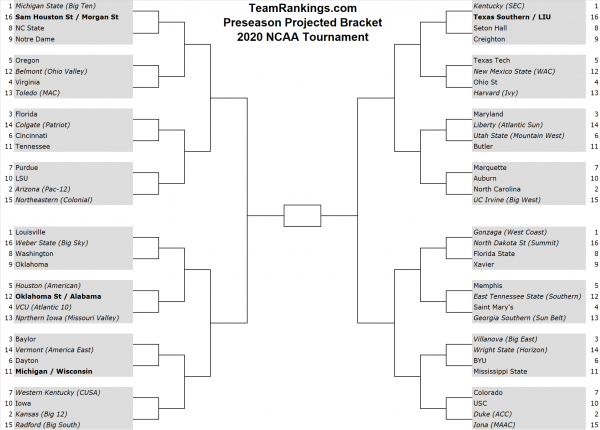 [Note: We’re not worried about following the NCAA’s bracketing rules here. We know that, for example, NC State shouldn’t play Notre Dame in the first round. Our goal here is to show expected seed lines for each team, and give an idea of the rough quality of opponent they might face in each round. Trying to predict actual bracket matchups at this point is silly.]

Preseason Bracketology 2020: Odds For All 353 Teams

What does that mean for you? It means you get to see lots of juicy data, if you so desire.

Here are our official 2020 NCAA Tournament preseason projected bracketology odds for every team. For a sortable table of similar odds that we update daily, check out our NCAA Bracketology detail page.