The NCAA basketball season tips off in just 3 days, and we can’t wait to get started. To whet your appetite for the upcoming season, here are our projected #1 seeds in the 2018 NCAA tournament:

Why do we have Arizona and Wichita State with a better chance at a #1 seed than Duke? Mainly because the Pac-12 and AAC are weaker than the ACC. Let’s look at Arizona vs. Duke in more detail to illustrate why this makes a difference.

Duke and Arizona have almost identical preseason ratings. Due to their easier conference, however, Arizona is less likely to stumble during league play. If both teams play at the same level this season, Arizona’s resume is going to look cleaner. They’ll have fewer losses, and will be more likely to nab a regular season title, conference tournament title, or both.

Here are highlights of our season projections for both teams. (Click the team name for more details.)

[Technical notes … 1) The overall record doesn’t include any games in early season tournaments where the opponent isn’t known yet. 2) The chance of winning both the regular season and tournament titles in a conference is higher the value you get by simply multiplying the chance of each happening, because the two events aren’t independent. Winning the regular season title results in an easier path during the tournament, plus it’s a signal that the team performed well, and is probably nearer to the top end of our projected rating range for them than the bottom.]

The selection committee will likely think the ACC is a better conference. But they’ll still probably give Arizona the top spot over Duke if Arizona sweeps the regular season and tournament titles, and Duke doesn’t … especially if Arizona has a couple fewer losses. (See: Villanova as the overall #1 seed for the 2017 tournament.) 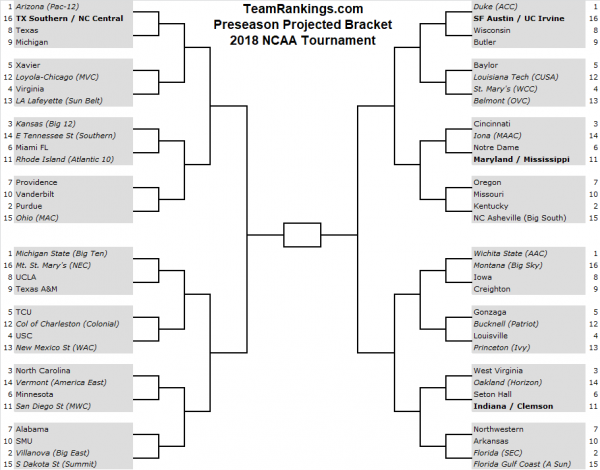 [Note: We’re not worried about following the NCAA’s bracketing rules here. We know that, for example, Florida shouldn’t potentially play Arkansas in the second round. Our goal here is to show expected seed lines for each team, and give an idea of the rough quality of opponent they might face in each round. Trying to predict actual bracket matchups at this point is silly.]

For that last step, we use a model trained on historical NCAA Selection Committee decisions. Put another way, this model uses relevant historical data not to predict how the NCAA Selection Committee should select and seed teams, but rather to predict how it actually will select and seed teams. Sometimes the Committee emphasizes things that aren’t necessarily tied to team quality, and our model takes that into account.

Preseason Bracketology 2018: Odds For All 351 Teams

Here are our official 2018 NCAA Tournament preseason projected bracketology odds for every team. Bookmark this page for later, so you can come back and congratulate us on getting every single team correct. 😉

For a sortable table of similar odds that we update daily, check out our NCAA Bracketology detail page.