***NOTE*** This is a winning Round of 64 entry in our inaugural Stat Geek Idol contest. This article was conceived of and written by Howard Hamilton of Soccermetrics. The opinions or predictions expressed below do not represent the views of TeamRankings.com, and are solely those of the author.

College basketball, like all other North American sports leagues, has a playoff format to decide its champion. The format is a 64-team (68 as of this year) knockout tournament in which teams are seeded and play against each other in neutral sites.

An obvious parallel for people outside this country is the English FA Cup, without home matches or the possibility of a replay, but with the possibility of lower-league or non-league sides knocking off established powers. Another parallel is the old European Champions’ Cup in that a team had to win its national league in order to gain entry to the Champions’ Cup. (This was actually the case with the NCAA tournament until the late 1970s!)

It is the selection of these teams that is the most controversial, and every year there are debates over who was more deserving to enter the tournament (“body of work” has to be the most overused phrase in American sports talk today). Virginia Commonwealth University, one of the national semifinalists last year, was one such team; George Mason University (a 2006 Final Four participant) was another.

I propose that there has to be a better way to allocate at-large bids, and my idea borrows concepts from soccer competitions and even political science.

My idea is an allocation scheme that accounts for past performance by conference teams in previous NCAA tournaments, lets both power and mid-major conferences know exactly how many NCAA slots they will receive at the start of the season, and makes the regular season much more meaningful. Moreover my algorithm is not very complicated; it is a little labor intensive with some basic math and the use of the sort button in a spreadsheet.

The inspiration for my approach comes from the domestic league allocations for the European soccer competitions (Champions League and Europa League). The allocations are determined by calculating a league coefficient from club results in the two competitions over the last five seasons, with bonus points awarded for advancing to later phases of the competition.

After ranking the national leagues with this coefficient, UEFA assigns the number of qualifying places to a league based on their position — top four leagues receive four places to the Champions League, leagues in places 5-8 receive three, and so forth.

I don’t believe that such an allocation scheme would be appropriate for at-large bids, as not every conference would be deserving of extra places based on previous results. Enter a concept from proportional representation in political science.

The largest remainder method is one form of proportional representation for assemblies with party list systems. It assigns seats to parties based on the number of votes that they receive relative to a quota, which is some ratio of the total number of (valid) votes cast to the number of seats in play. (This type of ratio is called a Hare quota.)

Parties first receive the integer part of the results of their votes divided by the quota, which is subtracted to give a remainder or the decimal part. Now, if you sum up all of the integers there will almost always be a certain number of unallocated seats. The parties are then ranked by their remainder and those with largest remainders are given one additional seat until there are no more unallocated seats.

Now, replace “parties” with “conferences”, “seats” with “bids”, and “votes” with “coefficient” and you have a pretty good mechanism for allocating at-large bids to the NCAAs.

So the “conference coefficient” is rather simple. For each conference in a given season you tabulate the number of teams that advance to the play-in round, then to the first round, second, third (Sweet Sixteen), and subsequent rounds up to the final survivor. The result is the following expression:

C_i is a weight that can be applied to each round of the competition. I used C1=0.5, C2=1, C3=2, and so on to C8=7. I use the previous five seasons to get a conference coefficient, which is either a unweighted sum of the season coefficients or a weighted one:

I try my allocation with both kinds of sums. I do not use an average to compute the conference coefficient; the allocation doesn’t work very well in that case, most likely because you’re no longer allocating bids from the sum total of “votes” or “wins”.

Below are the results for a weighted 5-year conference coefficient. You can see that the allocation method concentrates the at-large distribution among the power conferences, but mid-major conferences whose teams have gone deep in the tournament recently are rewarded. 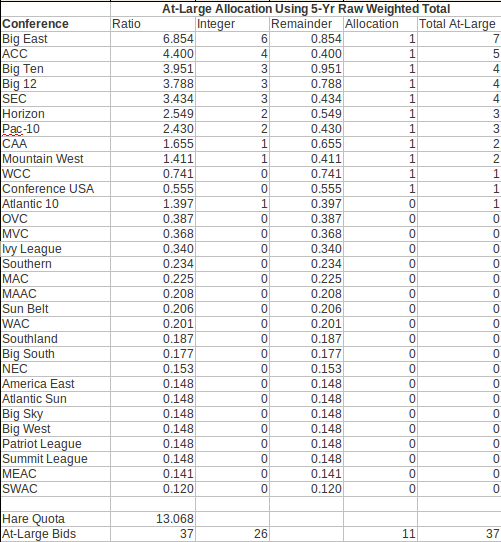 So would such an approach ever be adopted by the NCAA?

The members of the Selection Committee have consistently stated that past conference performance does not carry any weight in the number of teams selected, so I doubt that they would consider an approach that does take into account conference performance in the national championship tournament. However, such an allocation scheme would free up the committee’s time to argue seeding of the teams, which is just as controversial as who actually gets into the tournament.