One of my personal pet projects over the past year has been to take Dean Oliver’s Project Defensive Score Sheet idea from Basketball On Paper, apply it to college basketball, and run with it. That led to my series of defensive charting posts on Kansas last season, which eventually blossomed into a collaboration with Luke Winn for this year’s Sports Illustrated college basketball preview issue (much better in print or on iPad than online, I swear).

The Twitter response to that article has been very positive, and it’s led me to consider organizing a more widespread defensive charting project. The idea would be to crowd-source the effort required to do this time-intensive defensive charting. We ought to be able to get pretty complete coverage for the most popular squads, and could even try to tackle a full conference season for one of the major leagues.

But first, we need to jump through a few hoops.

One Step At A Time: Laying The Groundwork For A Volunteer Effort

The first step is simply to investigate how subjective and/or repeatable the process is. If two people chart a game and come up with completely different values, there probably isn’t a lot of point into throwing an army of volunteers at it. Or, at the least, there needs to be a set of more strict standards defined.

To look into this consistency question, Jonathon Leverenz (of A Sea Of Blue) and I both charted Tuesday night’s Kansas versus Kentucky game. I’m sure we’re not the first to do this — Oliver, at least, must have done it before embarking upon his defensive charting project for the WNBA — but to my knowledge this is the first attempt at having two people chart the same college basketball game, and then comparing the results.

Jonathon’s charts can be found in his post titled DSS: Kentucky Wildcats versus Kansas Jayhawks. He’s done a great job of expanding on the defensive charting concept, and records much more information that I currently do.

My results are published below. One thing to note is that we don’t have a standardized method of presenting the results, which might be a little confusing. That’s one thing we’ll need to work if we’re to get this volunteer project off the ground. But the more important thing to pay attention to is the actual raw numbers we came up with, along with the calculated values: Stops, Scoring Possessions Allowed, Stop%, defensive usage rate (%DPoss for me, Usage% for Jonathon), and Defensive Rating. I’ll go over the main similarities and differences between our numbers, but first, the charts themselves: 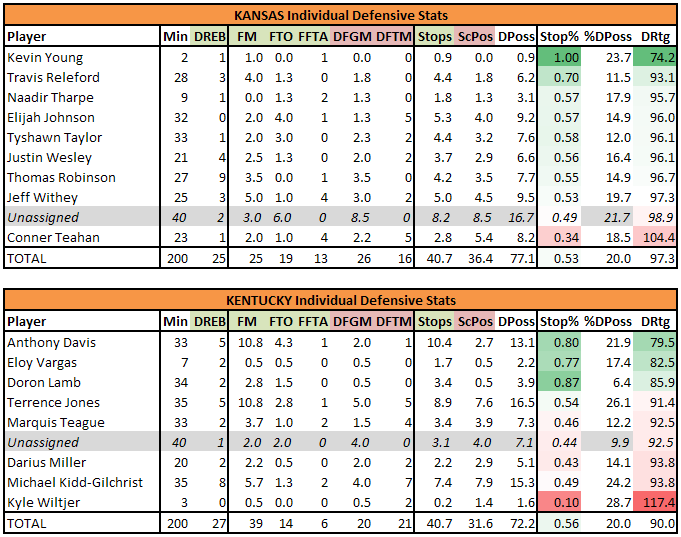 Now, here are the morals of the story.

What We Agreed On

Here are a few points on which our charting was pretty definitive, though some of these were obvious to any viewers with two eyeballs, as well.

Anthony Davis Took Kansas’s Lunch Money, And Charged Them Interest Because They Didn’t Pre-Emptively Send It To Him Before The Game.  Luke Winn and I charted 100 games from last season: 20 each for UConn, Florida State, North Carolina, Ohio State, and Vanderbilt. I also charted 15 to 20 Kansas games last year. In all those games, only seven players managed to record 10.5 forced misses in a single game, a number which Anthony Davis matched in his very first charted game. And among all those high-forced-miss games, almost nobody managed to force as many turnovers as Davis:

Yes, John Henson and Festus Ezeli are defensive gods. Everyone knows that. On to the real issues…

Jonathon credited Davis with an extra scoring play allowed, but overall, our numbers were similar. We both saw him as absolutely dominant.

Travis Releford May Have Looked Jittery On Offense, But He Brought It On The Defensive End. The most lasting memories of Releford in this game for Kansas fans may have been a flailing layup attempt and a blown dunk in the last ten minutes. But he did a great job on the defensive end. His low defensive usage rate was, subjectively, a sign of great off-ball defense.

Conner Teahan Was The Weakest Link For The Jayhawks. Not a lot to say here. The kid can shoot, but he was a step slow all night. We both rated Teahan as, frankly, terrible on the defensive end.

Michael Kidd-Gilchrist May Not Have Had A Great Game Statistically, But He Played An Extremely Valuable Role. Kidd-Gilchrist had the second most defensive plays by my count, and third most according to Jonathon, but also had either 2nd- or 3rd-worst in defensive rating, depending on which of us you ask. Those values are close enough to be useful, and they demonstrate that what I saw with my eyes was correct. The freshman was used for the better part of the game to pressure the player bringing it up the floor for Kansas. That led to high involvement, a bit of fatigue, and quite a few fouls of Tyshawn Taylor. But the Taylor fouls may have been the lesser of two evils. Kidd-Gilchrist tied up the Kansas point guard all night, and as a result clogged up the Jayhawk offense. Here’s a case where being worse than the team average defensive rating is actually not a bad thing, because of the huge defensive load he carried.

What We Disagreed On

There are obviously a few plays per game where reasonable opinions can differ. Let’s take a look at some example of differences between our defensive box scores.

I Gave A Lot More Credit To “Team” Defense. I credited 10% of Kentucky’s defensive plays and 22% of Kansas’s defensive possessions to the generic “team” totals, while Jonathon credited only 8% and 15%, respectively.

There are a lot of plays in a basketball game where there is a nominal defender, but it would be unfair to expect him to actually change the outcome of the play. I remember one play in Tuesday’s game where Kentucky had a 4-on-1 fast break, which they unsurprisingly converted into two points. I scored it a “Team” field goal allowed, while my guess is that Jonathon credited it to Naadir Tharpe, or Justin Wesley, or Travis Releford, or whoever happened to actually be back on defense for the play. That’s one of the things we’ll have to reconcile — how to treat “hopeless” plays for the defender.

Another aspect of “Team” defense is unforced turnovers. I think if you rewatch the game, you’d be hard-pressed to classify only 3 of Kentucky’s turnovers as unforced. Heck, Marquis Teague probably had more unforced errors than that all by himself. Now, I’m absolutely not saying that Jonathon did a bad job of scoring this.  It’s just that the definition of a “Team” defensive play needs to be clarified before we start “officially” collecting this data.

A Couple Small Changes Added Up For Terrence Jones. Jonathon had Jones’s man(/men) shooting 6 of 16.5 (36%). I had them at 5 for 15.8 (32%). I also credited Jones with an extra half of a turnover. The difference is basically 1.5 plays, which seems small, but it moves Jones from 4th-best in my chart to 2nd-worst in Jonathon’s.

Kentucky Had More Rebounds In The Game I Watched. This one is a bit surprising to me. To be honest, I use the box score to come up with my defensive rebounding numbers (a trick you can also use for free throws allowed). In ESPN’s play-by-play, there was a Kentucky defensive rebound, so I credited it to the Wildcats. Jonathon is missing that. It just goes to show you that, even when checking against the official box score, there can be errors.

Where We Go From Here

This was just my first glance at our two score sheets. I’ll take another in-depth look soon, and then I’ll try to develop a plan for the defensive charting project. There are a few things that I’m fairly sure will play a role:

There will definitely be some hiccups in this project in the early going. Some people will get discouraged because of the amount of time it takes to chart a game (Minor point here — don’t try to chart a game and watch as a fan at the same time. Doesn’t work. I’ve tried it. Watch it for enjoyment first, then chart it.). Some will drop off simply because te fad is over. But I really think that with a small handful of volunteers, we can make some headway this year.

As mentioned, there are still some obstacles. So don’t expect this project to get into full gear tomorrow. I do think, however, that by the time the conference season rolls around, we can get something pretty cool going here.

I’m looking forward to hearing all your comments and suggestions. Hit us up here in the comments, or send your 140-character thoughts to @TeammRankingsCBB or @AudacityOfHoops.