Chart Of The Day: Why Shaq Is Jealous Of The Missouri Tigers

[This guest post was conceived of and written by Gregory Matthews.  Gregory received his Ph.D. in statistics from the University of Connecticut in 2011 and blogs at Stats In The Wild. His idols are Derek Kellogg and John Tukey. If you have an idea for a guest post that you think would fit right in here on our blog, please email us.]

Free throws are boring. No kid growing up has a poster on his wall of his favorite basketball player shooting free throws. Free throws are like offensive lineman, they’re not glamorous, but they’re a very important part of the game. In fact, some of the most memorable ones are misses (Poor Darius Washington).

Well, I think it’s time to give the free throw aficionados out there some recognition.

The Award For Best Free Throw Shooting Goes To …

If there were an award show celebrating free throw shooting — the Freebies? — the grand prize would go to Big Sky powerhouse Weber State. They have  an absolutely absurd 81.3% free throw percentage on the year, 3 percentage points better than the next best team, Davidson.

The rest of the top ten includes Lehigh, Evansville, Lafayette, Missouri, Dayton, Richmond, Denver, and Eastern Illinois who are all shooting over 75%.

At the other end of the spectrum you have Central Arkansas, Prairie View A&M, Towson, Southeastern Louisiana, and Alabama State. All the members of this lowly club are shooting below 60% on the season. Not good.

Notice that of the bottom five, two of the teams come from the Southland Conference and two others are from the dismal SWAC. (Side note: Mississippi Valley State leads the SWAC. They are a sterling 13-0 in conference… and a dismal 1-11 in non-conference play). This got me wondering how free throw percentage related to the conferences. 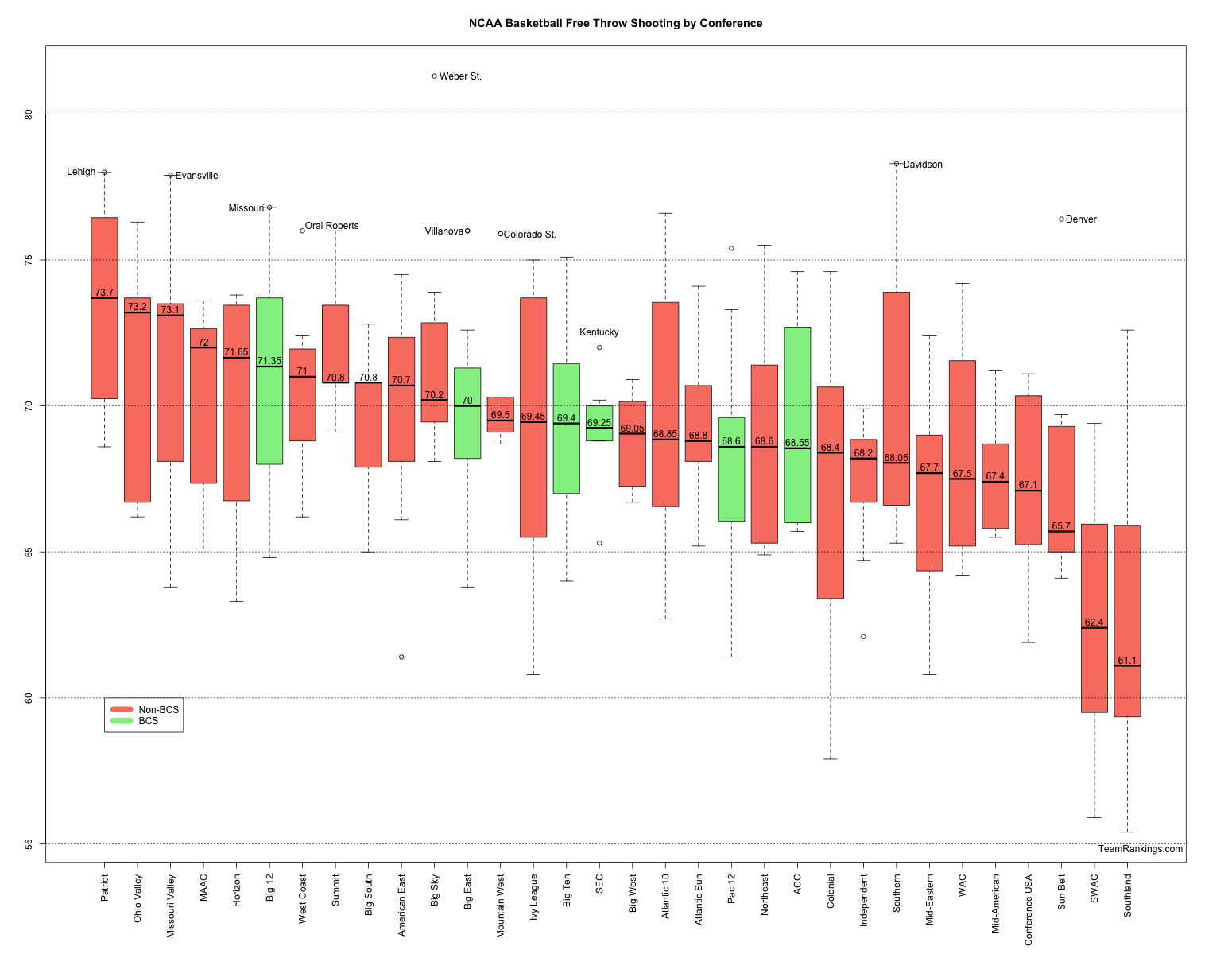 The best conference in college basketball at free throw shooting is the Patriot League, followed very closely by the Ohio Valley and Missouri Valley Conferences. There is a slow drop off across the rest of the leagues through Conference USA. Then there is a big drop moving to the Sun Belt followed by a massive drop to the SWAC and Southland.

One of the striking things about this graph is just how much Davidson and Denver stand out in their below average respective leagues. Denver is more than 5 percentage points better than the next best team in the Sun Belt.

But the most impressive team on this graph is Missouri. They not only lead the Big 12 in free throw shooting, they are 7th overall in the country. And that’s not all they’re good at, as evidenced by the fact that they are also 7th in the TeamRankings predictive power ratings.

Shaq said it was difficult to do everything well. But this year Missouri seems to have the free throws AND the rapping down to a science.