***IMPORTANT NOTE*** This is an entry in our inaugural Stat Geek Idol contest. The opinions and predictions expressed below do not represent the views of TeamRankings.com, and are solely those of the author. This article was conceived of and written by Mark Bashuk of SevenOvertimes.com.

I have play-by-play data for about 70% of games, so even though this analysis may not be perfect, I think it is still useful.

My definition of “close” was any game where the live win probability was between 30% and 70% with less than 5 minutes to go in the second half (or overtime).

Which Teams Are Used To The Pressure?

As you can see in the chart below, the six schools with the most crunch-time experience were Lehigh, West Virginia, Kansas St, Western Kentucky, San Diego St, and Iona. 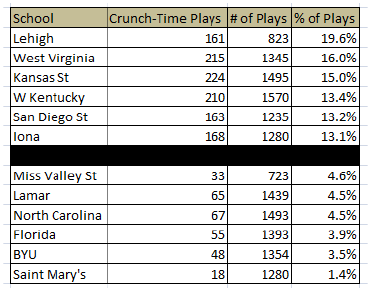 What makes this especially interesting is that all four teams from yesterday’s NCAA Tournament games are featured in this list.

You would expect the more experienced teams – like Iona – to perform better down the stretch than a less battle-tested team such as BYU. But as we all saw last night, BYU was able to withstand Iona’s early barrage and pull off the epic comeback.