We started with 64 first round Stat Geek Idol contestants, who sent in a wide variety of creative and eye opening articles. From that group emerged a Stat Geek Idol Sweet 16 (+2), who submitted another round of captivating analysis earlier this week. The winner of the contest will pocket a $1,000 gift card, some pocket protectors, and most importantly, worldwide fame and recognition as the very first Stat Geek Idol.

We published all the Sweet 16 entries on the TeamRankings blog, and then promptly dispatched them to our celebrity judging panel, which included a diverse mix of representatives from sports analytics, sports media, and academia. The judges each ranked the entries they received, returned their evaluations to us, and we’ve finished tabulating the results.

It’s worth noting, as you’ll see below in the judges’ comments, that the crowning of the Final Four wasn’t an obvious decision, nor did we expect it to be. Not all judges rated our four winners highly, and plenty of the entries that didn’t make the Final Four received at least one or two excellent scores. The bottom line is, don’t despair if you didn’t make the cut. You have high promise for Stat Geek Idol II.

Without further ado, ladies and gentlemen, we present to you the Stat Geek Idol Final Four…

Sweet 16 entry: Can The Kentucky Wildcats Be Beaten By The Fast Break?
Round of 64 entry: Play-By-Play Data Shows Why Wisconsin’s Defense Is So Successful

Comments from the judges
“Clear, provided context to the analysis, did not overstate the results of the analysis, gave me something to think about in watching the games. … This is the most interesting and timely topic of any of the entries I read, and the author addresses it in a straightforward and effective fashion. It’s not particularly sophisticated, I suppose, but not every important question brooks a sophisticated treatment. How the heck *do* you beat these Kentucky guys? Good stuff, though the writing could be a bit livelier. … Love the theme: what’s the right strategy to use against Kentucky. Relevant for right now, teaches some basic concepts, nice neat readable tables.”

Gregory (@StatsInTheWild) is a post-doctoral research fellow in biostatistics at the University of Massachusetts. He writes about college basketball with a heavy statistical bent on his personal blog, Stats In The Wild.

Sweet 16 entry: Measuring The Madness: 2012 Tournament Off To Craziest Start Ever
Round of 64 entry: Predicting The Sweet Sixteen Using A Classification Tree

Comments from the judges
“I’ve got a soft spot in my heart for visualizations. I liked the Madness Quotient and its visualization. Nice summary of how the tournament has gone. Though feel the color choice in the initial ladder color graph could be improved. … Pretty cool to actually see a hard number to determine which March was the maddest.”

Jordan (@hoopvision68) is a freshman at Villanova. He has coached an AAU basketball team, and has been known to delve into video charting at Hoop Vision.

Sweet 16 entry: Video Charting Wisconsin’s Swing Offense
Round of 64 entry: Quantity Over Quality: Getting More Whacks At The Piñata

Comments from the judges
“Loved it, one could apply his findings to analyzing Wisconsin going forward. Thought it was definitely the best of the batch I received. I might read it two or three times before Thursday night’s game. … Fascinating and unique topic, with lots of effort clearly put in. Almost too focused though; many people may not take away much from it.”

Nathan (@bbstats) writes about college basketball, an in particular posts lots of original stats and ratings, at his site, the basketball distribution. He also claims to play the “guitarvocalbassdrums” which sounds dubious to us.

Sweet 16 entry: Coaches Love Blocks: How Statistics Determine Player Minutes
Round of 64 entry: Not All Points Are Created Equally

Comments from the judges
“A very interesting topic, not superbly executed, but a very strong start and something I could see getting a lot more attention. … Seemed to gloss over how he arrived at some of the the numbers, but the conclusions were very interesting. Using playing time decisions to gauge player value is a new one to me.”

How The Final Four Will Work

The remaining four contestants will have until Wednesday night to submit another original post. The topic once again will be college basketball, but beyond that it’s wide open. We’ll post their submissions next Thursday and Friday (follow @StatGeekIdol on Twitter for updates), and pass their work on to our Final Four judges: 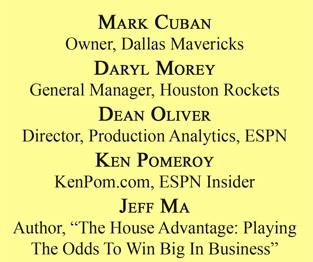 Those five illustrious gentlemen will have a few days to read and rate each entry, and we’ll compile the results.

The grand prize winner of Stat Geek Idol I will be announced on Monday, April 2nd, in advance of the NCAA Tournament national championship game.

Remember, the first-place Stat Geek not only gets his work read by movers and shakers like Mark Cuban and Dean Oliver, but also receives $1,000 and … probably most enticingly, some Oxford brand pocket protectors.

Great Job By The Rest Of The Sweet 16

We were impressed with the overall quality of the entries, and were not envious of the judges’ task of narrowing it down to four finalists.

Two entries came extremely close to being included in the Final Four. These are basically the equivalent of teams that lost in overtime in the regional finals. So we want to give special mention to:

Adrian Atkinson: Defense Wins Championships? No, Offense And Balance Do
“Well framed argument, logical conclusion, nice use of color coding in the charts. The argument is a little complicated, though, for wider audience appeal. Interesting approach on a traditional question”

Tyler Williams: Breaking Down Match Ups: Sweet Sixteen Game Simulations
“Good description of possession simulations, and a good starting point for thinking about matchups. Impressive analysis, statistics, and work went into this one. It likely goes over many people’s heads though. Conference affiliation may be a weak proxy for schedule strength correction.”

There were no clunkers in the remaining entries, either. We hope they’ll all participate in the next Stat Geek Idol competition.

Here they are again, in case you missed a post or two:

Bill Bihn: There’s Nothing Worse Than A Chalky Aftertaste: Big Favorites Relax After Halftime
C.J. Moore: Brick & Immortal: Kansas Survives Purdue Despite Putrid Shooting
Howard Hamilton: Tempo And Efficiency, Before And During the NCAA Tournament
Jack Moore: Lehigh, Duke, And The Equalizing Power Of Free Throws
Jay Cipoletti: Turnovers: Do You Want Them Dead or Live?
John Ezekowitz: Predicting NBA Draft Position From College Performance
Kenneth Deakins: Basketball, Probability, And Quantum Mechanics
Kevin Buikema: The Pod System: For Once The NCAA Got Something Right
Kevin Myhre: NCAA Tournament “Overachieving” & The Rise Of The Mid-Major
Martin Manley: What The Heck Are “Seed Gifts” And Why Is Kansas Smiling?
Michael Lopez: When Is A Win More Than A Win? Using Round of 64 Games To Predict Tournament Success
Travis Gerke: Putting The ‘College’ Back In College Basketball: Can Academics Inform The Bracket?