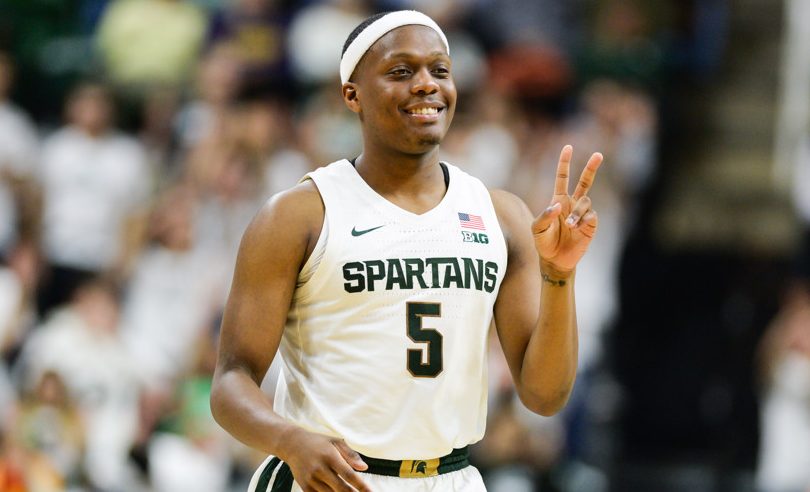 No, Cassius Winston, your team is actually No. 1 in our preseason ratings (Photo by Adam Ruff/Icon Sportswire)

If you want to read an in depth description of how these rankings are created, check out our blog post on how we make college basketball preseason ratings. Otherwise, read on for a discussion of the ranking highlights, the full rankings and ratings for all 353 teams, and a breakdown of which factors contributed the most to each team’s rating.

Let’s start with what everybody asks first … “who’s your number one?”

Michigan State Is The Clear No. 1

Last season, a case could be made for up to six different teams to be ranked 1st to start the season. This season, there’s really no question — the Spartans easily have the best profile.

Let’s lay out the case:

Josh Langford’s injury is the biggest concern. But he missed time last year as well, and Michigan State fared surprisingly well in his absence. They should be able to survive the regular season without him, and if he is healthy by March he’ll provide a boost come tournament time.

*NOTE: “Production” is measured by calculating each player’s individual offensive and defensive ratings from box score info, then comparing to a baseline in order to find their value over replacement. We then create a minute-weighted average of the individual player value to get the total production last season, and to find the percent of that value that’s returning.

Moving on to the rest of the top 25, let’s take a look at all the teams that made it into at least one preseason top 25 from among this group:

The table below lists all such teams, and shows the preseason rank in each system. It also shows the average rank, and a column indicating how far TR is from the consensus. (Positive numbers mean we project a team to rank better than the consensus, and negative is the reverse.) For teams receiving no votes in the polls, we used a rank of 55. Teams are listed in ascending order by average rank.

When comparing how teams are ranked across these systems, a few points stick out.

Torvik Bucking The No. 1 Trend

Five of the six rankings have Michigan State in the top spot, but Torvik’s ratings have them at No. 2, with Florida at No. 1. ESPN’s BPI has the Gators at No. 2, just a hair behind Michigan State.

There’s a lot to like about Florida’s profile. Kerry Blackshear Jr. is expected to be one of the biggest impact transfers in the country. They have a top 10 recruiting class. They return three talented sophomores who had productive freshman seasons (Noah Locke, Andrew Nembhard and Keyontae Johnson), and who should be expected to improve in year two. Michael White is by all indications an excellent coach.

Of course, they are not without flaws. They are starting from a relatively low baseline, as they finished only 26th in our predictive ratings last season. Outside of their sophomore trio, they aren’t returning a whole lot else, and we have them at only 47% returning production. They lost their most efficient scorer and best shot blocker from last season, Kevarrius Hayes.

Both human polls have Memphis and Utah State ranked in the teens, while none of the three computer rankings have them in the top 30. Why?

For Memphis, we suspect people are overrating the importance of their recruiting class. The Tigers have the top freshman class in the country, based on consensus rankings. Recently, we’ve seen the top incoming classes propel their teams to very good seasons, including No. 1 seeds and national titles.

The problem is that those top classes have been going to Duke or Kentucky teams coming off very good seasons. They were reloading, not building.

Our recruiting database covers 19 seasons. Of the top-rated classes from each of those seasons, Memphis’ previous-season predictive rating ranks 16th, meaning they are near the bottom in prior program performance for a top class. The closest comparisons based on those predictive ratings and our rating of their recruiting class are 2012-13 UCLA and 2007-08 USC. Both of those teams earned 6 seeds in the NCAA tournament, and both were upset in the first round. Coincidentally, our projected average seed for Memphis this year is … 6.

As for Utah State, they were a good non-major-conference team last season, and they return over 70% of their production, including star Sam Merrill. Plus Craig Smith is in his second year as coach after leading them to a huge improvement in year one. They’re a great story, which may be inflating their human rankings.

At the same time, the computer rankings may not adequately be accounting for how much an improvement Smith is over the previous coach, Steve Henson. We did adjust their “PROGRAM” component up a little to reflect that what happened 3 and 4 years ago may be less relevant for Utah State than for most schools, but it’s possible that adjustment should be even larger.

Our rankings have the highest correlation coefficient when comparing each system with the consensus, for the 38 teams listed here. Torvik’s have the lowest.

The rank order is:

Among the teams listed in the table above (top 25 in at least one system), we rank 6 teams at least 9 spots better than consensus:

We’re Not So Keen About …

We rank 5 teams at least 9 spots worse than consensus (again, only looking at the teams listed in the table above). We’re most pessimistic about:

Last season we listed 12 teams that we were high or low on compared to the consensus. Based on their final rankings for the season, we beat the consensus on 8, and the consensus beat us on the other 4.

OK, let’s get to what you’re really here for.

The table below shows our 2019 preseason ranking of all 353 college basketball teams, along with each team’s associated preseason predictive rating (e.g. 21.6 for Michigan State).

The team ratings are expressed as points better (positive rating) or worse (negative rating) than a “perfectly average” college basketball team, when playing on a neutral court.

The final eight columns of the table show the relative contribution of specific factors our preseason ratings model considers, as well as a final “market adjustment” we make for each team.

Here’s a quick explanation of those factors. For more detail, read our post on how we make college basketball preseason ratings.

What Do We Use These For?

Using these ratings, we’ve run full season projections, which are live on the site now. Go check’em out! Pages include:

It’s worth noting that Ken Pomeroy, Dan Hanner and Bart Torvik have compared our preseason ratings and/or projections with other stat-based prognosticators in past years. Our finish has been consistently good, though also consistently a bit behind Dan Hanner’s bottom-up, player-based projections (which he unfortunately stopped producing after the 2017-18 season).

*worth noting that this analysis used the final Pomeroy ratings as the “true” result, so Pomeroy may have a bit of an advantage here

Taking several years of data into account, and placing some emphasis on consistency, we feel we probably have the second best preseason computer ratings out of those tested, behind Dan Hanner’s (now defunct) player lineup based projections, but ahead of Ken Pomeroy, and ESPN’s BPI.

In terms of human ratings, John Gasaway leads the pack, and has performed only slightly worse than our computer ratings.

We say this not to brag, but to try to preemptively defend ourselves against the inevitable “Team X is WAY too high/low! You don’t know what you’re doing!” comments. While these are by no means perfect rankings, the projections they drive have held their own in comparisons with other top projection systems. We expect them to do so again this season. We’re going to get plenty of individual teams wrong, but that’s inevitable when the challenge is to project 353 teams.

Some people get quite worked up about preseason college basketball rankings — especially when our approach seems to think their favorite team is going to be worse than the prevailing consensus.

That’s to be expected. No one else ranks teams exactly like we do, and our approach often discounts the impact of things that many media analysts and basketball “experts” believe to be important.

We also have a very specific goal for our preseason college basketball team ratings, which relates to predicting the margins of victory of future college basketball games. That goal doesn’t line up exactly with the motivations of many other rankings makers.

Just keep in mind that predicting how 353 different college basketball teams are each going to do this season, before any of them have played a regular season game, is no easy task. No system is perfect, including ours. It has strengths and weaknesses. We expect to get some teams slightly wrong, and some other teams very wrong, for a variety of reasons.

But in the longer term, our approach has done very well when measured by the yardstick that means the most to us: the overall accuracy, across the entire universe of 353 college basketball teams, of projecting team performance levels at the end of the upcoming season.

Finally, please remember to look at team ratings and not just rankings, because ratings tell a much more precise story.

In other words, North Carolina is roughly as close to being No. 2 (4 spots higher) as they are to being No. 7 (only one spot lower).

As a final reminder, be sure to check out the season projections we create using these 2019 college basketball preseason rankings. There’s a ton to see: