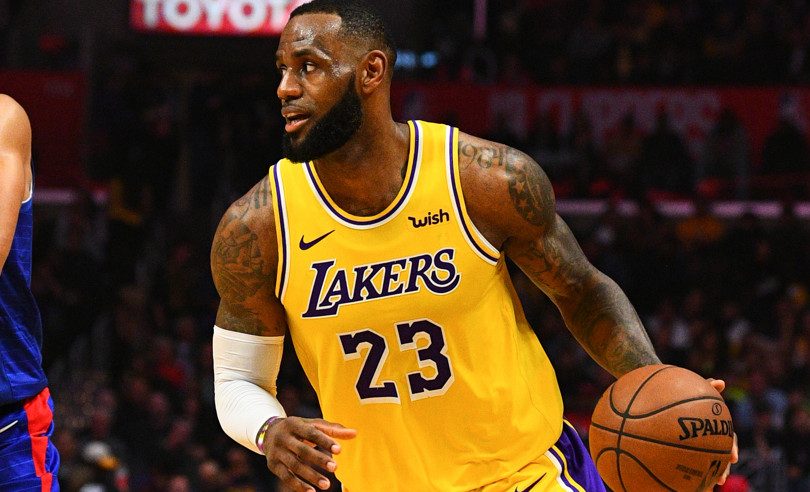 We recently refreshed our preseason NBA predictive rankings and NBA projected standings pages for the 2019-20 season. Those pages will update every single day through the end of the season.

This post serves as a snapshot of our preseason projections, plus we’ll briefly discuss some highlights.

Below are our NBA season projections as of Monday, October 14, 2019.

These projections are based on our 2019-20 NBA preseason ratings. We use those ratings to simulate the full NBA season, including playoffs, thousands of times. We report the average outcomes of those simulations here.

As they do every season, player injuries, suspensions and other unexpected events that occur as the season goes on are likely to derail at least a few of these initial forecasts. That’s an inevitable risk of trying to predict the distant future. It’s also part of the reason why we incorporate variance into our season simulations.

Also, note that the numbers in this post may change a little bit from day to day before the season actually starts. That’s not us adjusting numbers behind the scenes. It’s just variance in the results of the season simulations, which we re-run daily.

We project the Rockets to be the most likely division winner in the West, while the Clippers are a slight favorite to win the Pacific Division with Golden State’s expected decline. Denver and Utah are in a virtual dead heat for the top spot in the Northwest Division to start the season.

Houston Rockets have our highest championship odds in the Western Division, but they still clock in at only at 15%. Last year, the Warriors were the highest at 27%, and in the two years prior to that, the Warriors were projected at above 50% to win the title. We have projected six different Western Conference teams with title odds between 4.6% and 15.2%, so this is the most wide open the conference has been since before the Golden State Finals run began.

How much of this is because of the big changes to Golden State roster, where Kevin Durant is gone and Klay Thompson is out for a large part of the season? Most of it, actually. The best non-Golden State Western Conference team has had an average rating of +6.0 and projection of 56.0 wins in our last four seasons of preseason rating and rankings posts. That’s basically right on target with where Houston is this season.

The Lakers have refreshed the majority of their roster since last season. The biggest move, both in terms of on-court impact and headlines, was dealing Lonzo Ball, Josh Hart, and Brandon Ingram to the Pelicans for Anthony Davis. Davis gives the Lakers a second star, and one who seems to complement LeBron James. The plethora of veteran free agents they’ve signed — most notably Danny Green, Dwight Howard, Quinn Cook, and DeMarcus Cousins (though he is injured) — doesn’t exactly scream “title contender”, but with the presence of both LeBron and AD, it’s tough to envision them missing the playoffs again (assuming reasonable health). They are projected to rise from 37 to 48.4 wins.

The Phoenix Suns were quite bad last year. However, they’ve jettisoned three of their four worst players from last season according to VORP (Value Over Replacement Player): Josh Jackson, Jamal Crawford and Dragan Bender.  And they’ve signed or traded for several players with positive impacts last season: Ricky Rubio, Dario Saric, Aaron Baynes, and Frank Kaminsky. Plus their roster is fairly young and should expect more improvement than decline, as far as aging goes. Add it all together, and they’re expected to only be below average instead of terrible, improving from 19 to a projected 31.9 wins.

Due largely to the loss of Kevin Durant and injury absence of Klay Thompson for most of the season, Golden State is projected to decline from 57 wins to 48.6 wins this season. However, they are not our biggest projected decline for the 2019-20 season in the Western Conference. That honor goes to Oklahoma City, who traded away Russell Westbrook and lost Paul George in free agency. We have the Thunder dropping from 49 wins to a projected 38.9 wins.

Portland is also projected to decline by nearly 10 wins, from 53 to 43.5. Jusuf Nurkic, their best big man from last year, suffered a leg fracture this summer and is expected to be out for at least half the season. The team also has plenty of other roster turnover. Al-Farouq Aminu and Moe Harkless are gone, and Hassan Whiteside, Kent Bazemore, and Mario Hezonja are new to the roster. In addition, Portland finished second in our Luck Rating last season, winning an estimated 3 more games than would have been expected purely based on their predictive rating. So roughly one third of their projected drop in wins could simply be attributed to not expecting them to overperform their record again.

The Bucks are the only Eastern Conference we project as more likely than not to win their division. That’s partly because we have them as the No. 2 team overall, but also because of the four Eastern Conference teams in our top ten, three are in the Atlantic division (Philadelphia, Boston, Toronto). We project Miami as essentially an average team (ranked 14th, rating of 0.5), but in a weak Southeast Division, that’s good enough to be the favorite.

The Bucks at 15.0% are essentially tied with Rockets (15.2%) as our co-title favorites. As mentioned in the Western Conference preview above, that’s a relatively low chance of winning for a title favorite. With no clearly dominant team, there are more teams this season with small but not insignificant shots at a title. In the Eastern Conference, we project two more teams with a 5-10% chance (Philadelphia and Boston), and four more with at least a 1% chance (Toronto, Indiana, Miami, Orlando).

The Bulls missed the most games due to injury of any team last season, so some improvement should be expected simply by assuming average health. In addition, their offseason moves haven’t landed them splashy, big name stars, but they’ve acquired several solid, versatile players (Thaddeus Young, Tomas Satoransky, Luke Kornet). And they hope their young core — especially Lauri Markkanen and Zach LaVine — will improve. Add it all up, and we project them to improve from 22 wins to 34.7.

The Knicks won the fewest games in the NBA last season (17). Generally a win total that low only happens if you get some bad breaks (and let’s be honest, if you are actively not trying to win for draft position), so it’s tough not to expect a little improvement simply due to regression. They’ve also added some players who aren’t stars, but ought to be improvements over the near-replacement level players on the court last season, including Julius Randle, Taj Gibson, Marcus Morris, and Elfrid Payton. Overall No. 3 pick RJ Barrett is the cherry on top. We project them to improve from 17 to 25.1 wins.

The Toronto Raptors traded for Kawhi Leonard and Danny Green in 2018, knowing full well they might only have both for one season. They made the most of that one season, but now both players are gone, as well as the pieces they gave away in the trade (mainly DeMar DeRozan). Toronto’s win total is expected to drop by more than 10 this season, from 58 to 46.5. Of course, that still leaves them as one of the best teams in the Eastern Conference.

The Charlotte Hornets are expected to have an even larger drop, to an even lower win total. The Hornets lost their two top scorers (Kemba Walker and Jeremy Lamb), as well as two of their three highest scoring bench players (Tony Parker and Frank Kaminsky). They’re being replaced by Terry Rozier and a bunch of rookies. It’s not going to be pretty, and they are expected to drop from 39 wins all the way down to 25.4, battling Cleveland (23.7) and New York (25.1) for the top spot in the draft lottery.

Enjoy the 2019-20 NBA season, and remember, plenty of these projections will end up being wrong, for lots of possible reasons. Our goal is the overall accuracy of the system, and in particular the team ratings and projected win-loss records. Even if the system as a whole ends up being more accurate than lots of other prediction methods, the projections for any one specific team could still be way off.

The value we bring to the table is a sophisticated, systematic model that can precisely evaluate dynamics that human experts are generally terrible at understanding — stuff like the likely impacts of schedule strength, or the chance that a star player breaks his hand a month into the season. Our system is driven by objective data that has demonstrated predictive value, and not by subjective opinions.