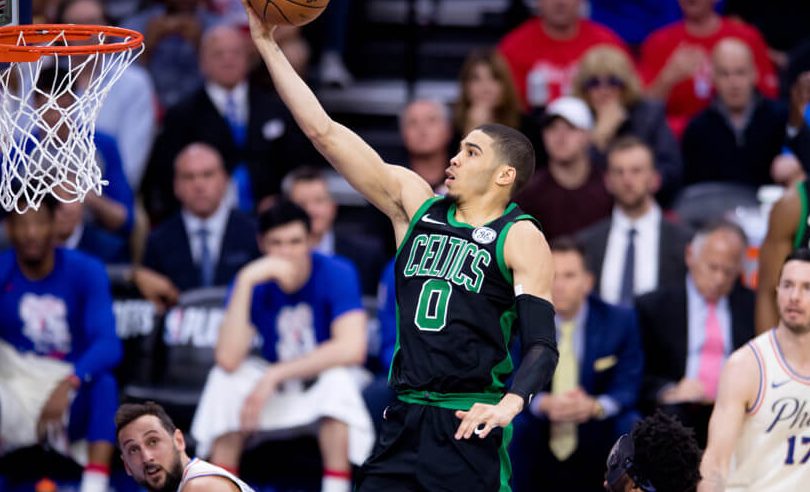 We recently published our preseason NBA predictive rankings and NBA projected standings pages for 2018-19. Those pages will update every single day through the end of the season.

This post serves as a snapshot of our preseason projections, plus we’ll briefly discuss some highlights.

Editors Note: You can sign up for algorithmic NBA picks and predictions (game winner, point spread, over/under, and money line) for all 2018-19 games on our signup page.

Below are our NBA season projections as of Tuesday, October 9, 2018.

As they do every season, player injuries, suspensions and other unexpected events that occur as the season goes on are likely to derail at least a few of these initial forecasts. That’s an inevitable risk of trying to predict the distant future. It’s also part of the reason why we incorporate variance into our season simulations.

Also, note that the numbers in this post may change a little bit from day to day before the season actually starts. That’s not us adjusting numbers behind the scenes. It’s just variance in the results of the season simulations, which we re-run daily.

We project the Warriors and Rockets to repeat as division champs. The Jazz finished one game out of first in the Northwest last season but were hampered by injuries, and went 29-6 over their final 35 games.

Best NBA Championship Win Odds: In the previous two preseasons we projected the Warriors with greater than a 50% chance to win the title. This year that has fallen all the way to 27%.

However, there’s a very big caveat here. Our projection system uses a single team rating to project both the regular season and the postseason. It doesn’t take into account what we like to call the “shortened playoff rotations” factor. A top-heavy, superstar-laden team like Golden State clearly benefits from their stars playing a greater percentage of minutes in the playoffs, compared to the regular season. Our projection code, however, assumes that a team is essentially the same in the regular season and the postseason. As a result, it understates the playoff advancement odds for the teams with the very best players.

Golden State this season is an extreme case of this. If they wanted to try to match their regular season wins record from a couple years ago, they could play their stars big minutes, and rack up gaudy win totals and margins of victory. But based on what we’ve seen since they added Kevin Durant, they’ll take a more relaxed approach to the regular season. It’s this approach that is reflected in our preseason rating for the Warriors. We place a priority on projecting the regular season win totals, rather than the title odds. They are still rated the best by a considerable margin, but they’re not rated as highly as they’d be if our main goal was projecting the playoffs.

This is something we’d like to improve in the future from an analytical standpoint.

Expected To Improve: We project three teams to improve by 10 or more wins this season: Memphis (22 to 33.7), Dallas (24 to 34.9), and the LA Lakers (35 to 45.3). Memphis and Dallas are your traditional “there’s nowhere to go but up from here” teams. They both added significant draft picks (Jaren Jackson, Jr. and Luka Doncic, respectively), and add veteran help. The Lakers … well, they signed LeBron.

Biggest Loser: “The Kings and the Suns both suffer from the major disadvantage of being in the same division as Golden State (and therefore having to play them more times). Both are projected to win only 27 games.”

That paragraph is actually copied directly from last season’s preview. Nothing has changed this season except the numbers: the Suns are projected to win 29 games now, and the Kings 25.

Best NBA Championship Win Odds: The Atlantic division is loaded this season. Our top three Eastern Conference teams all hail from the division. Boston is projected with a 15% chance to win the title, Toronto with 11%, and Philadelphia with 6%.

However, it’s worth keeping in mind what we discussed above in the Western Conference write up. Our playoff advancement odds are skewed because we are projecting the full season with the “regular season Warriors” instead of the “playoff Warriors”. All three of these teams probably truly have lower title odds than projected by our system.

Expected To Improve: The Magic are projected to improve from 25 wins to 31.1. No other team is projected to increase by even 4 wins, on average. Cleveland, however, should be roughly 19 wins worse.

Biggest Loser: The Hawks won only 24 games last year, and haven’t made any major additions this season. They are projected for 23 wins.

Enjoy the 2018-19 NBA season, and remember, plenty of these projections will end up being wrong, for lots of possible reasons. Our goal is the overall accuracy of the system, and in particular the team ratings and projected win-loss records. Even if the system as a whole ends up being more accurate than lots of other prediction methods, the projections for any one specific team could still be way off.

The value we bring to the table is a sophisticated, systematic model that can precisely evaluate dynamics that human experts are generally terrible at understanding — stuff like the likely impacts of schedule strength, or the chance that a star player breaks his hand a month into the season. Our system is driven by objective data that has demonstrated predictive value, and not by subjective opinions.