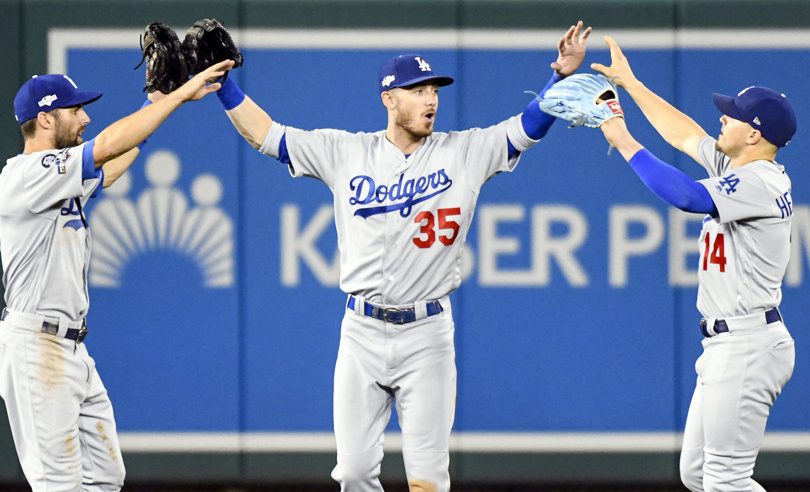 All signs point to the Dodgers being the favorite, unless someone steals it from them (Photo by Mark Goldman/Icon Sportswire)

Our 2020 MLB Projections are back again for another run. In early March, we released them initially, right before the pandemic shut down the sports world. The 162-game schedule is gone, and in its place we now have a 60-game schedule for each team. Not only that, but the breakdown of who teams are playing has changed dramatically, with teams not traveling cross-country in 2020 and staying in their own regions.

With all that in mind, here are our updated 2020 MLB preseason ratings and 2020 MLB projected standings.

As always, the main purpose of our preseason MLB ratings is to provide a data-driven starting point for our MLB projected standings.

Those standings and seed projection pages are updated every day to reflect the latest results and most up-to-date MLB power ratings.

How We Create The Preseason Ratings

For football and basketball, we use our own data and models to come up with independent estimates of team quality. We then compare those to the market, and to other projections, and make final adjustments.

We treat baseball a bit differently, though. So far at least, our methods for projecting MLB aren’t as cutting edge, relative to other sports. So rather than trying to create our own preseason ratings, and deriving a season projection from those, we base our initial MLB projected standings on a weighted average of betting market info and projected standings from other well respected sources.

Essentially, we combine projected win total info from various sources into a consensus win total projection for every team. Then we figure out what preseason team ratings would lead to those exact projections.

We’re still publishing these, so that you know what the initial rating in our projection system was for each team. But at this point we can’t recommend using these MLB projected standings to go place preseason bets, for example, if for no other reason than we haven’t done extensive backtesting of our approach.

You may look at the projections and think that they aren’t extreme enough. In a way, you’d be right — no team is projected to win fewer than 20 or more than 40 games in the shortened season. Now, it will almost certainly happen that a team or two will get on a hot streak over a stretch of 60 games. Some others will go in the tank.

But if a team jumps out to a 45-15 record, it’s going to be because things have gone better than could have reasonably been expected. And picking which teams will wildly exceed expectations is rather tricky. On average these conservative predictions should provide a less biased starting point than more aggressive ones.

If you’d like to see our more aggressive best case and worst case scenarios for each team, check out their team projections page. Here are the LA Dodgers projections and the Baltimore Orioles projections as examples.

Click through to find a chart showing the projected odds of the Dodgers or Orioles winning any specific number of games. From the details in the Orioles’ chart, you can glean that we project about a 2.6% chance that Baltimore finishes 12-48 or worse this year. Gulp!

The projections detail page also includes a list of each team’s toughest & easiest games, and a table showing how their chances of winning the World Series change depending on what seed they get in the playoffs.

Here are some highlights that stand out about the 2020 projections:

The shortened season and schedule format has altered some of the specific playoff outlooks slightly. This is particularly true of NL Central teams, who now get the benefit of having the AL Central make up one-third of their schedule, while avoiding teams like the Dodgers, Braves, and Nationals.

So the net result of this is that the Cincinnati Reds, St. Louis Cardinals, Chicago Cubs, and Milwaukee Brewers all have a slightly better chance than before of making the postseason. None of those teams are in the Top 8 of our overall power rankings, or among the top 4 in the National League.

In the AL, Cleveland now has a slightly higher win projection than Oakland for the final wildcard, despite being our No. 19 team in the power rankings (Oakland is No. 9). That’s how different the schedule strength is for the various teams and groupings.

Here is how the playoffs would play out, if these projections are spot on (numbers below refer to the team’s playoff seed within their league).