Week 7 was yet another overall negative week for my FanDuel entries, though there was one silver lining — my tournament stacks ended up slightly positive for the week.

When reviewing why I lost, I noticed something surprising (to me): a high percentage of my head-to-head opponents made the same lineup choices at running back (Freeman & Gurley were both picked by 92%) and defense (74% picked St. Louis), and  those choices turned out well.

This prompted me to take a look at the data to see if I also should have predicted those choices and/or performances. As it turns out, a simple defensive model I just put together did indeed predict the high St. Louis ownership. More on that below.

At first I thought a few losing weeks to start the season was just variance rearing its ugly head. But we’re almost halfway through the season, and my cash game (i.e. head-to-head & 50/50) lineups have had only one winning week.

More worryingly, the losing weeks haven’t been just slightly down; they’ve been losing big. In 5 of 7 weeks, my cash game lineups have had ROI’s of -28% or worse, including worse than -63% three times.

This is almost the direct opposite of last season, where my cash game lineups were a net positive in 7 of 8 weeks, and had an ROI better than +69% four times.

On the other hand, my tournament lineups have continued to keep pace with last year. I’m up slightly for the season in my tournament plays, and that’s including the poor tournament performance of my cash game lineups, which I have been throwing into one or two tournaments each week. So far I’ve been positive in 3 of 7 weeks, compared to 4 of 8 last year. Given that the general strategy in big tournaments is to mix in a few big wins along with some expected small losses, this is acceptable.

As a result, I’m making a couple changes:

As mentioned in the intro, 74% of my head-to-head opponents last week chose the St. Louis defense. This seemed like a crazy high pick rate to me, and it made me suspect that a lot of the “sharp” DFS players are using similar models or heuristics to pick their defense.

If that’s the case — that the vast majority of sharp players are coming up with the same defensive pick — then I figured the models they’re using can’t be that complicated. If they were, there would have been less consensus.

So, I rolled my own simple model last night. I did this quickly, and took a lot of shortcuts. It’s definitely got some methodological issues, but it’s “good enough for government work,” as they say, and the outputs pass the smell test. Last week, it showed St. Louis as the clear best pick for defense.

Because I don’t really think it’s a great model, I’m not going to get into the nitty gritty details, but I will say that the variables I used were (from most to least important):

This week I’m going to base some of my defensive choices on the outputs of the model, with some manual adjustments for injuries.

After looking into my opponents’ picks last week, I’m changing up my strategy a bit this week. At positions where I think some specific pick will be very popular, I’m going to default towards making the same pick, if I don’t have a strong reason to think that player or defense will underperform.

Let’s look at St. Louis last week as an example of why this strategy makes sense.

There was very heavy usage for a few key players last week, including the St. Louis defense. I didn’t use St. Louis, they scored 25 points, and I was in a big hole right off the bat in 74% of my head-to-head matchups.

Picking a team other than St. Louis last week was analogous to picking a big underdog to win a game in an NFL pick’em pool. If the favorite wins you lose ground to most of the pool, but if the underdog wins you give yourself a leg up on everyone. It’s a high-risk, high-reward strategy. On the other hand, if you pick the favorite, and the underdog wins, you’re not in terrible shape since very few opponents probably gained ground on you. It’s a low-risk, low-reward strategy.

In other words, without a very strong reason to believe that St. Louis wasn’t going to do well, picking the “favorite” was probably the best move last week in head-to-head matchups. (In tournaments, on the other hand, fading the popular team can make more sense.)

In order to project pick%, I’ll mainly be relying on this Reddit thread, where people share pick% info from their Thursday tournaments.

As a quick reminder, the original strategy here was to be willing to pay for volume points at QB & RB, even at the expense of a little bit of value. I’m still going to do that; this increased attention to pick% is just an addition to my already existing strategy guidelines.

Here’s my primary lineup for Week 8:

Some notes on this lineup:

Notes on this lineup:

As is the case most weeks, my first step this week was to come up with some single-team stacks that seem to have the potential for a big day.

Some of these stacks were based on fantasy-points-allowed to each position from this season (using RotoGuru as my source), and others were keyed on a particular player or two who were well-projected by consensus sources, or who looked like a potential great targets-per-dollar value.

In addition, I’ve done some research recently into what characteristics are common to “monster” QB/WR games. Preliminary research seems to show that moderate home favorites (roughly 5- to 9-point faves) in games with moderately high totals lines (over 45) are good candidates for stacks. This week, that includes the Falcons and Panthers.

Here’s what I ended up with:

Filling in around the stacks with solid consensus values, with some emphasis on trying to find players with high upside, here’s the result (click to enlarge): 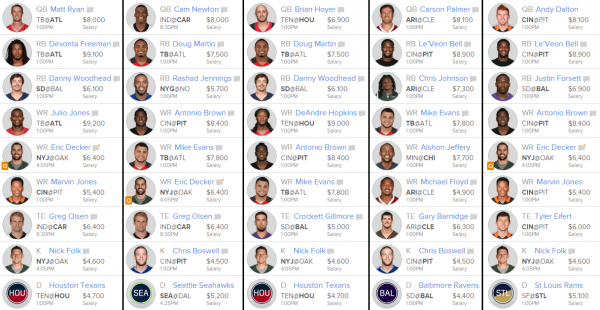 I also couldn’t help myself, and had to enter one mostly model-based lineup. For this lineup, I made simple projection models for every position except wide receiver. I then narrowed my choices down to the top few highest-value picks at each position (according to the models), and let RotoWire optimize a lineup using only those players. At wide receiver, I simply tried to use players that were consensus solid values at both RotoWire and numberFire. Here’s what I ended up with.

The above lineup feels more to me like a 50/50 lineup than a tourney lineup. But I’ll enter it in both types of contests, and see how it does.

The most likely outcome for any specific tournament lineup is that I win nothing, but with multiple stacks, hopefully at least one will still do well enough to recoup my buy-ins, and let me tread water while I wait for a big payout.