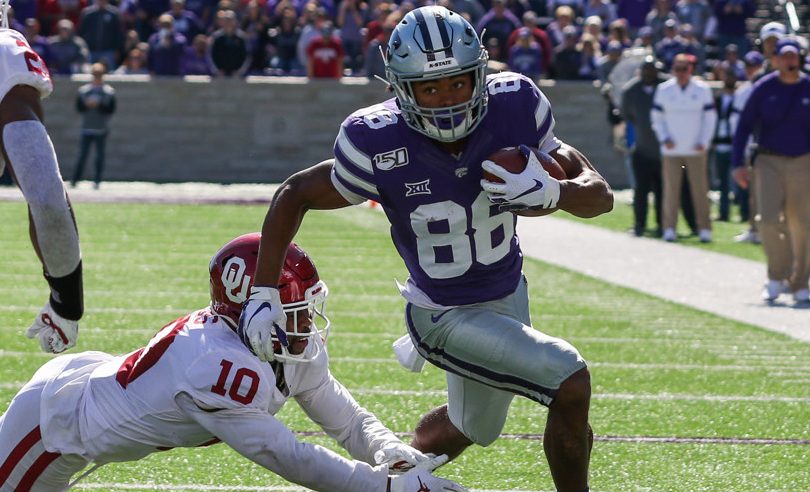 In this post we highlight our biggest college football rankings and season projections changes heading into Week 10 of the 2019 season.

Three Big 10 teams were among the biggest movers this week. Michigan’s big win over Notre Dame improved their overall rating by over three points, the Minnesota Golden Gophers remained undefeated with a blowout victory over Maryland, and Illinois followed up their win over Wisconsin with another one against Purdue.

Kansas State had the biggest result of the week, even if they weren’t the biggest ratings mover, when they jumped on Oklahoma with a big 3rd quarter surge and then held on for the upset.

Tennessee, meanwhile, has rallied after a rough start to the season and got their third victory of the year.

Missouri has had a weird season, and lost their third game this year as a double-digit betting favorite in blowout fashion at Kentucky (also losses to Wyoming and Vanderbilt).

Notre Dame was eliminated from college football playoff contention with the loss to Michigan, and Oklahoma also suffered a defeat at Kansas State among teams that entered Week 9 inside our Top 10 rankings.

Remember when Temple upset undefeated and ranked Maryland? Now both are plummeting in our rankings and outside the Top 50 after big blowout defeats.

Note: These are predictive ratings, driven by margins of victory and not a team’s win-loss resume so far. You can see the full 2019 college football power ratings here.

This is going to sound like a broken record, but Ohio State is again separating from the pack after yet another dominant win over a good program after beating Wisconsin. The Buckeyes are still only No. 3 in the AP Poll but could be putting up one of the most dominant seasons in recent college football history.

Minnesota, still undefeated, moves into our Top 25 with the big win over Maryland. Notre Dame drops out of the Top 10, and Michigan moves into it, after the Wolverines won convincingly.

Oklahoma’s college football playoff hopes took a hit with the loss at Kansas State, but their chances of winning the Big 12 did not drop all that much, because both Iowa State and Texas also lost. In terms of winning the title, it doesn’t matter if they finish 1st or 2nd in the regular season, and we project them to be the favorite over Baylor or anyone else if they reach the title game.

It’s a big weekend in the Pac-12 with Oregon going to USC and Utah traveling to Washington. If both of the conference leaders can win on the road it will set up a showdown in the Pac-12 title game. USC can throw a major wrench in that plan if they beat Oregon, because they also then hold the head-to-head tiebreaker over Utah in the Pac-12 South.

While the bowl eligibility rules can be convoluted, and there is a possibility that a few schools could get into a bowl game with a losing record and have their eligibility decided by a variety of tiebreakers, generally you have to win six games to get an invite.

Here are the teams that have most improved their chances of getting to six wins with the results of the last week.

Illinois went from an extreme longshot to get to 6-6 just a couple of weeks ago to now a favorite to do so after getting to 4-4. They get Rutgers next week, and if they can get the win over the worst team in the conference, would then need one more in the last three weeks.

Tennessee fans can now entertain some bowl hopes after beating South Carolina. They still need to win three of the last four games, but the schedule is such that it is possible. They close with UAB, at Kentucky, at Missouri, and home against Vanderbilt.

While factors like schedule strength and particular matchups certainly play a role, one of the best indicators of being in the running for the College Football Playoff is being a Power Five Conference team that goes 11-1 or better. No team that has been 10-2 or worse before conference championship games has finished in the Top 4 in the CFP rankings yet.

The upcoming Ohio State-Penn State and LSU-Alabama games are going to be huge matchups that look like they will decide who will advance to the title games in the Big 10 and SEC, respectively. Don’t rule out that the losers of those games could also be in the college football playoff mix as well.

After those four (plus Clemson), we do not project any other Power Five schools to have over a 50% chance of finishing at 11-1, after Oklahoma’s loss. However, Oklahoma, Baylor, Oregon, and Utah all have a shot and if any of those teams can win out they will be in the playoff hunt. Meanwhile, this week’s World’s Largest Cocktail Party between Georgia and Florida looks like an elimination game when it comes to playoff hopes for those two teams.

Outside the Power Five, there is going to be a close race to see who gets the automatic berth into the Cotton Bowl. Right now, Appalachian State, Boise State, Cincinnati, and SMU are the most likely candidates.

Enjoy college football Week 10, and if you’re in a pick’em contest or planning on betting some of the Week 10 games, please check out our Football Pick’em Picks and College Football Betting Picks. 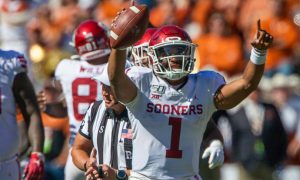 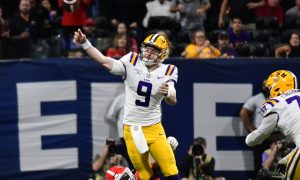